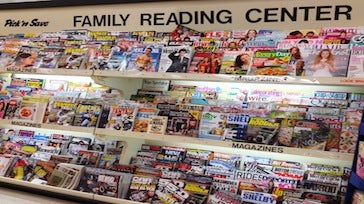 The decline in women’s weeklies, alongside double-digit drops in the celebrity and men’s lifestyle sectors, drove total average circulation of all magazines down by 4 per cent in the period.

Despite the drop James Papworth, marketing director of trade body the Professional Publishers Association (PPA) says the figures represent a “robust” return for for the sector in the current economic climate. He cited the continued growth of the Teenage Lifestyle and Pre-School categories, which registered a 55.4 per cent and 11.9 per cent rise in circulation period-on-period, respectively as signs of “encouraging times ahead” for the publishing sector.

Papworth also defended the role print still has for publishers as part of a multi-platform strategy. “Print still has a massive part to play in the future of magazines and how advertisers target readers. Publishers are starting to seriously look at how they can leverage their digital products like apps and digital editions to drive readers back to print products,” he says.

During the first half of the year, 60 magazines chose to report their digital edition sales figures to ABC, up from 16 in the same period in 2011. Paid for digital sales for those titles rose by 92 per cent to 185,210.

Of those, Future’s gadget magazine T3 reported its first ABC digital publications certificate revealing an average monthly circulation of 17,682 for its iPad edition. It provides a significant boost to the print circulation which stood at 49,006 in the second half of last year, down 13.8 per cent year on year.

Nial Ferguson, group publishing director of Technology at Future, says:“Tablet publishing is a huge opportunity and transparency is absolutely crucial. Since the inception of Apple’s Newsstand in October 2011, T3 has seen exceptional digital growth. Together with the issue by issue circulation breakdown, we are giving advertisers and agencies greater choice and greater knowledge of what they are getting.”

The publisher is also looking to experiential events to boost its advertising revenues by launching an events division. Future CEO Mark Wood says the move is part of an overall drive to build audience engagement.

He adds: “By boosting our experiential offering we’re looking at how we build our digital audiences out from tablet and mobile devices to offer them more around our brands.”

Elsewhere, Hearst Magazines UK claims it has sold more than 350,000 digital editions across the period with its Cosmopolitan magazine selling an average of more than 13,000 per month.

Media experts say that print circulation will continue to decline across the board and added that publishers should be looking to replicate the successful strategies of Teenage Lifestyle and Pre-School brands Moshi Monsters and Egmont Publishing’s Disney and Me by creating more branded content and become less reliant on traditional ad-funded models.

Papworth adds that the publishing model needs to focus around content grouped under “trusted brands” regardless of what platform they appear in to be profitable in future.

He says: “Advertisers are only interested in being associated with trusted brands and gaining insight into specific audience types. Display advertising still has a part to play in brands engage readers but its the actual magazine content and how they tap into it which has the most potential for publishers.

Other magazine sectors to buck the downward consumer trend include news & current affair: domestic, which was up 5.4 per cent to 663,107, Music Rock which includes titles such as Bauer Media’s Mojo and IPC Media Uncut, was up 14.5 per cent to 516,629, while leisure interests: home entertainment rose by 25 per cent to 500,000.