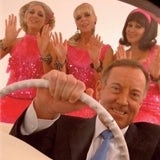 Peter Wood, the “serial entrepreneur” credited with revolutionising financial services when he set up Direct Line in the 1980s, is settling into the chief executive’s seat at Esure, his joint venture with HBOS, following the departure of previous boss Peter Graham (MW last week).

Wood will still contribute to marketing Esure, and sister brands First Alternative and recently launched Sheilas’ Wheels. He has a reputation for making waves in financial services marketing. He “never goes for the easy option”, as one insider puts it. That rang true in 2002, when Wood roped in Michael Winner for an excruciating campaign – written, directed by, and starring the flamboyant film-maker – that polarised the industry. Winner was eventually retired in favour of claymation character Mister Mouse, although observers believe the rodent’s reign may be curtailed too – Esure, however denies this. Some experts say Winner provided a memorable reference point for consumers. But Lucian Camp, chairman of financial services specialist agency CCHM:Ping, disagrees: “Creating consumer preference through differentiation is hard in this market. Esure’s ads make you feel like it’s the last company you’d want to be insured by.”

Despite having over 1 million customers and a market share of more than 5% across its brands, industry players say Esure, founded in 1999, has not been as successful as initially expected, or as groundbreaking in online as Direct Line was in using the telephone as a customer channel when it launched with RBS-backing in 1985. In its most recent results, HBOS said its share of losses in Esure for 2005 were &£34m, up from a loss of &£27m the previous year. This was due to “significant investment” in the brands, the bank stated. Camp adds: “Everyone now plays by Peter Wood’s rules. But Esure certainly hasn’t had the transformative effect of Direct Line. The market is sharper and more crowded than it used to be.”

If Esure has disappointed observers of late, they still feel Wood is capable of steadying the ship; he is described as both innovative and progressive. But these characteristics don’t always make for a happy ship. As one insider cryptically adds: “Most people that successful are not very laid back. All big entrepreneurs share the same characteristics.”

Wood was previously an IT professional and global data processing manager at Levi Strauss. An Esure spokesman says: “Marketing is in Peter’s blood. He realises that brands create awareness, which creates business in the insurance world, which is both unappealing and relatively intangible to most people. Esure’s brand is key to its reputation, so he will always be heavily involved. But as chief executive he intends to leave most of the day-to-day decisions to [head of marketing] Chris Bowden.”

One former RBS marketer observes: “Peter is visionary, one of the rare breed of people who sleeps with his eyes open.” Yet he also speculates that Wood feels hemmed in by the stricter controls of HBOS, in comparison with RBS, where the top brass “has a successful reputation for giving teams a lot of rope”. The Esure spokesman counters: “HBOS has directors on the company’s board and takes a keen interest. But Peter has ultimate control and runs the business day to day in a hands-on way.”

And Camp adds: “Like all serial entrepreneurs, he will probably start something else up. Direct insurance is what he knows, but whether he could set up another company is hard to say – it’s not the wide-open space it was in 1985.”