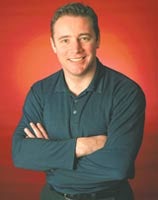 ITV has attracted the equivalent of &£20m from more than 30 advertisers that have created campaigns specifically for the World Cup.

Pepsi, Walkers, Nike, Adidas, Standard Life, Budweiser, Renault, Kit Kat, Carlsberg and Coca-Cola are among the advertisers that have created advertising tailored to the World Cup, which is being broadcast on ITV 1 and the BBC.

Across the day, male audiences are up 25 per cent against expectations for the month discounting the tournament itself, which has helped to boost revenue aimed at men by about 80 per cent.

For the hours to 5pm on ITV1 commercial impacts are up on normal June expectations for adults by 40 per cent; for men by 100 per cent and for ABC1 men by 120 per cent.

Graham Duff, chief executive of ITV sales house Granada Enterprises, says: “We are happy with the audience figures and revenue figures are slightly better than we expected.”

Late money has come into the market each time England has made it to the competition’s next stage.