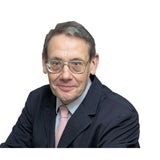 Be careful what you tell your hairdresser – you may only have gone in for a quick wash and set, but you could end up with a quickie divorce

Yet again, a hick company of notaries causes this column to regret a youthful folly. Years ago, when Last Word was still in nappies, it campaigned vigorously for solicitors to advertise their services. It was the height of the Thatcher revolution, and there seemed to be no good reason why lawyers should not submit to the bracing stimulus of competition rather than continue to profit from an opaque fee system.

The Law Society opposed this modest proposal with a matching vigour. Those of us in the free market camp put this last-ditch resistance down to a blend of stuffy conservatism and downright protectionism. We were wrong. What we did not know, and wiser heads in the Law Society knew only too well, was that this august legal body harboured in its midst as fine a bunch of hucksters and venal twisters as might be found outside the walls of Pentonville prison.

We won, but it was a pyrrhic victory. Solicitors began to advertise their services, at first in the tentative and restrained fashion that the advocates of change had envisaged. Small ads appeared in the Yellow Pages and the classified columns of local newspapers. But soon, like a forest fire ignited by a stray match, legal advertising took an unstoppable hold and spread with alarming speed in previously unimagined directions.

It was unfortunate that the liberalisation of solicitors’ advertising coincided with the advent of the compensation culture and the breakdown of family life encouraged by the easing of the divorce laws. These developments, combined with an unprecedented rise in the numbers of young people qualifying as solicitors, transformed the previously sedate world of legal practice into a fiercely competitive, cut-throat scrummage.

The pin-striped provincial solicitor, stalwart of the Rotary Club and confidant of the local gentry, a figure who inspired trust and epitomised bourgeois sobriety, was thrust aside by young men and women in sharp suits and matching elbows. Eager to adopt the new meaning of professionalism, which, borrowing from the tawdry world of football and the professional foul, translated as getting one over the opposition by any means short of actually drawing blood, they quickly made themselves indistinguishable from estate agents. And when the rules were changed to allow them to offer services on a “no-win, no-fee” basis, they really showed their teeth.

Soon, we became used to TV ads touting for business among those unfortunate people who had suffered injuries of some kind, breaks and bruises that in an earlier age would have been shrugged off as nothing more than the unhappy consequences of accidents, which, as we all know, happen. While those of a scrupulous disposition and a delicate stomach found the spectacle of ambulance chasing not to their liking, others put it down to just another example of post-Thatcherite capitalism.

But even those prepared to tolerate a measure of commercial robustness are looking askance at the wheeze being perpetrated by Trethowans solicitors in Salisbury, Wiltshire. The firm has approached hair salons throughout the city, offering &£75 “commission” for every client passed its way through information gathered from the stylist’s chair.

It occurred to someone at Trethowans in an idle moment when not writing minatory letters and charging by the second for doing so, that women (and some men) are given to confiding in their hairdresser. They treat the crimper as a kind of psychiatrist and take the opportunity to unburden themselves of their troubles, troubles that might be marital. And when the acrid aroma of a failing marriage is in the air, a divorce lawyer smells money. So the company is making its business cards available throughout the hairdressing circles of Old Sarum.

Not every Teasy-Weasy in town is happy. Steve Hall, of Heaven Hair, is outraged at being asked to betray the confidence of clients. “I could not believe they would ask me to sell out my customers,” he says, showing in that simple sentence that he has greater integrity and higher principles than the members of the learned profession whose city he shares.

Trethowans is, as might be expected, unapologetic. The ploy, says the firm’s marketing director Bryn Hughes, is an example of “creative marketing”. In this, he is undoubtedly right, just as an accountant is right when he refers to cooking the books as merely “creative accounting”.

I do not suppose that Hughes can see anything wrong in his creativity, so here are a few notes to assist his understanding. In no particular order, the tactic is sneaky, invites a breach of confidence, trades on misery, exploits weakness and – in offering back-handers – shows all the integrity of a spiv.