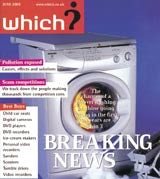 It is not clear how the appointment of WPN will affect the organisation’s retained agency, Rapier. However, a Which? spokeswoman says: “That agency relationship is under review and we are also talking to other agencies regarding other projects.”

Rapier was CA’s first retained agency and helped the organisation, which has print and online publications, rebrand as Which? last year. However, the account has been dormant in recent months and Which? has been in talks with Rapier over the relationship (MW May 12).

Rapier was appointed by Gardner’s predecessor, Geoff Hurst, in December 2003, to handle CA’s &£14m marketing business. Which? has worked with several agencies, including Corporate Edge, Miller Bainbridge and Target Direct on a project basis.

Which? recruited chief executive Peter Vicary-Smith last year from Cancer Research UK, where he was commercial director. CRUK is a pioneer of DRTV.

WPN was founded in January 2003. Its clients include ActionAid, Picture Financial, RNID, Time Life and WaterAid.