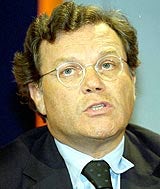 WPP is considering trying to withdraw from its bid for Tempus, following the acceptance of its £432m offer for the media specialist by over 90 per cent of Tempus’ shareholders.

WPP’s soul-searching has been caused by the stock market turmoil since the terrorist attacks of September 11 (MW last week). Share prices have plunged across the board, and Tempus shares are now hovering at about 490p, well below the WPP cash offer of 555p a share.

WPP may seek to invoke a rarely used stock market mechanism, known as “material adverse change” (MAC), if it seeks to withdraw its bid. Once a special competition panel agrees that MAC – in effect force majeure – was present, the bid can be declared void. Tempus would continue to be independently quoted, but City analysts believe its share price will plummet if WPP walks away.

A source close to the WPP bid says: “Can anyone doubt that September 11 was a material adverse change?” However, some City experts argue that WPP’s position on MAC has been weakened by its deliberate acquisition of a further three per cent of Tempus shares since the terrorist attacks. Other sources rebut this, claiming the shares were a minimum number, bought specifically to shore up WPP’s position against the original bidder Havas Advertising, which has since withdrawn. They say that the three per cent brought WPP’s holding to only 25 per cent, whereas it could easily have acquired up to 29.9 per cent in the market, under the terms of the bid.

WPP is expected to clarify its position on invoking MAC later in the month. If stock market conditions improve, it may not do so. It has until October 31 to decide. Informed sources believe that it is unlikely that European competition authorities will intervene – an intervention could also have the effect of nullifying the bid.