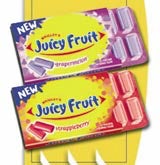 Confectionery company Wrigley is extending its Juicy Fruit brand into pellet format for the first time in the UK. It is also introducing a new flavour, “Strappleberry”, which is a combination of strawberry, pear and apple.

The pellet product, which will be launched in September, aims to attract younger consumers to the brand. Juicy Fruit, which celebrates its 40th anniversary this year, has been revamped, with a packaging overhaul. There will be marketing activity, although the details have yet to be confirmed.

Juicy Fruit is positioned as a product that sits between chewing gum and bubble gum, but its popularity has waned as consumers have moved to sister Wrigley brands such as Extra and Airwaves. The latter brands fit into the company’s strategy of developing products outside its core gum market, with the launch of mint strips, such as Extra Thin Ice, and products with “functional benefits”.

At the end of August, Wrigley will launch an on-pack promotion called Chew and Win. The promotion will run across the Extra and Orbit brands and will be tied into a marketing campaign for each brand. Consumers will be asked to enter an on-pack code into a website to find out whether they have won. Prizes include trips to the US and film premiÃ¨re tickets.