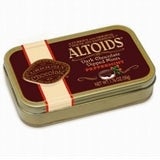 Wrigley is using auction site eBay to kick-start interest in a chocolate-dipped variant of Altoids Curiously Strong Mints. The product is due to be launched later this year.

The confectionery and chewing giant is auctioning one of each of the three flavours in the range – peppermint, cinnamon and ginger – with proceeds going to the American Red Cross. Bidding had reached $160.49 (£84) as Marketing Week went to press.

Companies are increasingly using eBay to generate pre-launch interest in products. In April last year, Coca-Cola auctioned 10 bottles of Coke Zero and a range of Coke Zero promotional items two months before its US launch. Again, proceeds went to the American Red Cross.

Wrigley bought Altoids and the Lifesavers brand from Kraft in 2004 for $1.48bn (£790m). It is understood to be seeking an agency to handle pan-European advertising for Altoids and hopes to position the brand against Ferrero’s Tic Tac and Nestlé’s Polo.

Wrigley is also reviewing its media country by country across Europe. The review does not affect the UK account, which is held by MediaCom. The Altoids brand was launched in England in the 1780s, and was later acquired by Terry’s of York. Kraft Jacob Suchard later acquired the Terry’s portfolio.