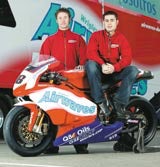 The three-year deal is the most high-profile sponsorship in Superbikes this year and will see the team, which took a year-long break from the sport in 2004, renamed Airwaves Ducati.

Airwaves will be launching a marketing campaign based around the theme of “preparation” to support the sponsorship. It says preparation is a fundamental element of the sport, adding that its gum leaves people feeling invigorated and ready for anything.

Ducati has had sponsorship deals with leading brands in the past, including NatWest.

It is thought the pitch is being run out of the company’s US headquarters. The UK division, the Wrigley Company, spent more than £18m on advertising last year. It uses Abbott Mead Vickers.BBDO for its Airwaves and Orbit brands and Bray Leino for its Extra and Hubba Bubba ranges.