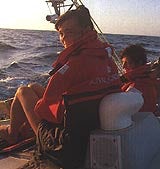 Sailing legend Tracy Edwards is searching for a £5.4m title sponsor for her latest attempt to capture the Jules Verne Trophy, awarded to the holder of the world speed record for circumnavigating the globe in a yacht.

She plans to take on the challenge of breaking the record in early 2003. Her team of 14 hope to be the first all-female crew to capture the trophy. The sponsorship trawl will be headed by Pitch Media, which was appointed last week.

Edwards was on course to achieve the record in 1998. But the mast of her yacht, Royal &amp; SunAlliance, broke 2,000 miles from land, leaving the crew adrift in the Southern Ocean for two weeks.

Title sponsorship will pay for the purchase of a catamaran and cover “logistical costs”.

The boat will be named after the sponsor, which will have access to all crew members throughout the project.

Edwards, who will lead the project from the shore, says: “The Jules Verne Trophy is the last truly prestigious sailing feat that an all-girl crew has yet to achieve.”

A television agreement has already been signed with RDF Media to produce a series of documentaries on the project.

Edwards shot to fame in 1989, when she captained the first all-female boat to compete in the Whitbread Round-The-World yacht race, and finished second.