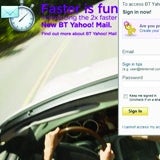 The Advertising Standards Authority (ASA) took the decision based on its new remit to oversee non-paid for digital marketing messages and claims on company websites.

Complainants believed that the ad condoned driving at speed and irresponsible car handling.

Yahoo! defended the ad by saying it was meant to be light-hearted and referred to the speed of the Yahoo! Beta Mail service. The ad did not contain any references to the car’s actual speed and the blurred scenery helped depict it was travelling along a mountain path.

However, the ASA decided that the combination of the “Faster is funnier” headline and blurred background portrayed speed in a way that could encourage anti-social behaviour and poor driving.