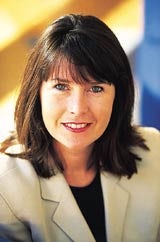 King will have an equity stake in the Web company, which offers information and shopping services as well as being an online navigational guide. It has a claimed 80 million users worldwide and is listed on the Nasdaq market in the US.

King was previously managing director of Capital Radio, where she spent six years, and before that she had a four-year stint at The Guardian.

She takes up the newly-created post at Yahoo! next month, des cribing it as “the opportunity of a lifetime”. She adds: “I really believed in what I was going to do at TSMS. I certainly wasn’t looking for another job.”

The UK and Ireland is Yahoo!’s next biggest market after the US. King’s brief will be to develop Internet use and increase income at the company, which has recently launched its own free Internet service provider.

She will report to the managing director of Yahoo! Europe Fabiola Arredondo.

King’s boss at TSMS, chief executive Jerry Hill, says she will be released from her job immediately because of the short length of her employment.

King was hired to woo the biggest advertisers and their agencies to TSMS and ITV in general – a different role to her predecessor Adam Rhodes who, as chief operating officer, focused more on operational issues. He left at the beginning of the year to join Efdex, an electronic food and drink trading company.

Yahoo! Europe has also appointed Jerry Glover, former managing director of the National Geographic Channel, to the new role of commercial director, Europe. He will be responsible for sales and distribution and brand and trade marketing.

Does the Web necessarily detract from print magazines, or can the two work in tandem? Despite the critics, Helen Donald finds that computer trade titles and their online versions are symbiotic

The Royal Horticultural Society (RHS) is holding a four-way pitch for its £500,000 ad and media account, which includes the world’s biggest flower show at Hampton Court Palace. The RHS, which also organises the Chelsea Flower Show, has split with incumbent Cardiff agency Golley Slater, which handled the account for five years. Golley Slater is […]

I was interested to see that in relaunching its fleet marketing programme, Nissan chose to continue using a magazine as its main communication vehicle. As Simon Carr points out, in “Fleeting gesture” (MW September 2), Nissan is talking to people who are “bombarded with information” – most of it fleet magazines from other manufacturers. It […]