An out-of-print book on fly fishing may not seem like the most likely candidate for an ad that people will continue to talk about 35 years later. But add in the heart-warming charm of JR Hartley and it’s not only one of the most memorable ads of the 1980s, it’s also people’s favourite, according to a Marketing Week and YouGov Omnibus poll.

The ad in question shows an elderly gentleman going from shop to shop trying to find the elusive book to no avail. But when his daughter suggests looking in the Yellow Pages he finally manages to track down a copy from the comfort of his armchair, and his pleasure in doing so is all the more palpable when the viewer discovers the man hunting for the book is the author himself.

“Good old Yellow Pages. We don’t just help with the nasty things in life like a blocked drain. We’re there for the nice things too,” the voice over declares. In 1983, when the ad first aired, this was quite a departure for the brand.

“Yellow Pages was a place you turned to if somebody broke your window or your plumbing packed up, but no one had really explored the opportunity of expanding usage,” says John Condron, who headed up marketing at Yellow Pages at the time and later went on to become CEO.

The brand had been using the strapline ‘Let your fingers do the walking’ for so long that people automatically linked Yellow Pages to emergencies, leading to “fairly stagnant” use. With the UK showing signs of economic recovery following the recession in 1980, Condron decided the time was right to try something different and he put the campaign out to tender, with a two-word brief: increase usage.

AMV was one of the agencies that pitched, but its success was not a foregone conclusion. Condron describes AMV at the time as “a curiosity” because it was known more for print and outdoor advertising.

“[David] Abbott had been described to me as the doyenne of copywriting; he was the great god Abbott. So we went into AMV and they talked us through the strategy. David was quiet throughout; Peter Mead always took the lead on these things. David was sitting with his hands behind his head, leaning back in his chair looking out the window, and to be honest I looked at him and thought, shouldn’t you be paying more attention, isn’t this important to you?”

After they shared their initial thoughts, Condron says Abbott sprung to life and said “you know what, this isn’t it. It’s more of the same stuff, it’s not the way this should go”. “He said, ‘leave it with me. I’ll write an ad over the weekend and we can see where we go from there’,” Condron recalls.

Yellow Pages was a place you turned to if somebody broke your window or your plumbing packed up, but no one had really explored the opportunity of expanding usage.

While the ad itself took a little while to hone, Abbott was clear Yellow Pages’ positioning needed to change from something people turn to in an emergency to a helping hand for the nicer things in life, which was in line with the brand’s research.

“He told us, ‘if people only use the book in emergencies they keep it in a cupboard or use it as a door stop. If we’re going to increase usage, we’re going to have to give people a more positive feeling when they see the yellow book’,” says Condron.

Mead says the idea itself was inspired by his fruitless hunt for a CD player. “I was desperate to get my hands on one. I kept wandering into stores to find they’d all sold out. And I suddenly thought, ‘hey, why don’t I use the Yellow Pages’. And the next day I found one,” he explains.

“I recounted this story to David and Leslie [Butterfield, then planning director at AMV], and this little experience really triggered something in David’s mind.”

Condron describes the ad as “a knock out” that led to usage going up almost immediately. “The impact was quite extraordinary. Our sales people were coming to us and saying, we’ve never had a response like this before.”

Yellow Pages had penetration in non-emergency classifications of between 5% and 6% in the 1970s, but in the years following the ad it rocketed to between 15% and 20%.

“The ad is unashamedly emotional and people liked that,” says Mead. “Emotion is the most powerful human sentiment. People could relate to it. It’s why these ads have stood the test of time.”

The only ad from the 1980s with greater recall is the Oxo family series, which scored just higher with 69%. But when it comes to people’s favourite ad, Yellow Pages is by far and away the winner, garnering 24% of the vote, with Oxo coming in second (18%) and Levi’s ‘Launderette’ ad coming in third (15%).

Mead recalls the ad could have been quite different though. Abbott’s first script was for a book on European butterflies, with the second ad set to be about a man trying to buy his daughter a pony. But after doing some research he decided “butterflies and ponies were a bit too elitist”, so they instead settled on a book on fly fishing for the first ad and a father finding a bike for his son in the second, which aired in 1985.

The ad also did wonders for Norman Lumsden, the retired opera singer who played JR Hartley. Condron said Lumsden once joked that he had a better career as JR Hartley than he ever did as Norman Lumsden – people recognised him in the street, and he was opening supermarkets and county fairs. He even released a book on fly fishing in response to consumer demand. 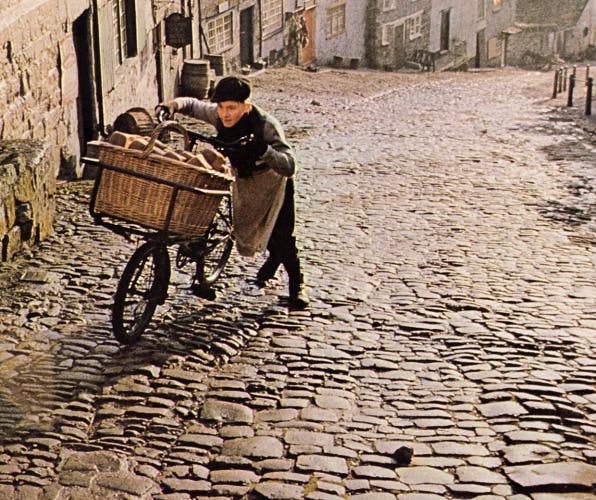