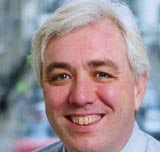 Docherty, who is also a regular columnist for Media Guardian, recently left Telewest, where he was managing director of broadband. He was responsible for developing a range of broadband content and services focused on health, games and entertainment.

He continues as chairman of Living Health, the NHS-funded project, as well as Network Games, a project with Sony, and new ventures, including Vis-ITV and Start!Games, which exploit breakthrough technologies.

Docherty says YooMedia is “pushing the boundaries of what you can achieve on interactive television and we share the same objective: to create innovative and engaging services that build a community through the TV.”

Before working at Telewest, Docherty was deputy director of television, director of new media and a member of the board of management at the BBC. He was responsible for the development, launch and ongoing editorial and financial control of brands such as UK Gold, UK Style, BBC Choice/BBC 3 and BBC Online.

YooMedia has recently launched the interactive TV channel yoome2 on Telewest broadband. It is a new community channel that enables viewers to play exclusive games, such as Tetris, to chat with other users and download ringtones and logos.