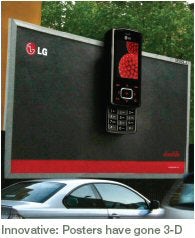 Outdoor and ambient companies have never been afraid to experiment with creative, and sometimes outlandish, ways to get the attention of both advertisers and consumers. Many established forms of ambient media, such as washroom posters and screens in pubs and shopping centres once seemed unlikely to last.

Although observers across the ambient media sector agree that it is starting to grow up and move away from the stunts that used to dominate, there are still a number of agencies out there with an eye for a great gimmick – film distributor Twentieth Century Fox used the sick bags in Virgin Atlantic flights to promote Star Wars III: Revenge of the Sith when the film was released last summer.

Interesting developments are being made in the more established outdoor media sectors such as posters, which are increasingly being given a twist. All of the major poster companies are now building on the traditional medium in order to make consumers look twice.

outdoor innovations In December, JC Decaux Innovate and WCRS created a Ferrero Rocher pyramid at London’s Cromwell Road to kick off the festive season. The giant pyramid was over 27ft wide and 23ft high. Other new innovations include lenticular posters and cut-outs. Clear Channel promoted the launch of John Grisham’s book The Broker last year with a giant 3-D book stuck to a 96-sheet poster. The poster had the strapline “Nothing grips like Grisham”.

JC Decaux Innovate has also been catching consumers’ attention by creating posters out of Spangleys – small sparkly discs. In July, GlaxoSmithKline used orange Spangley’s to promote the relaunch of Lucozade. It created a 13ft high map of Great Britain that looked like it was made of Lucozade.

As consumers become more used to seeing advertising while they are out and about, outdoor companies are increasingly looking for opportunities to speak to the public when they least expect it, such as at an ATM or in a pub toilet.

Addirect, an ambient media company that works across the leisure industry, has built on the traditional washroom poster with the launch of Addmirror, two-way mirrors which reveal an ad when someone looks in it.

Addirect managing director Ben Grant says the mirrors play on people’s vanity and that dwell times for campaigns using Addmirrors are high. He says that a campaign to support the launch of the Superman 2 DVD had a 63% recall rate, and he believes the mirrors have a long-term future.

He says: “There are not that many big scale innovations in ambient media. New developments tend to be temporary as the novelty soon wears off, but Addmirror aims to be more sustainable. We think that it is something that people can identify with.”

Addirect has also developed branded stickers that can be placed at the bottom of sinks and urinals which change colour when wet. While the stickers are another innovation, it is hard to measure how successful such innovations are for advertisers.

cashing in on the atm Advertisers such as the COI, British Airways and The Home Office are also using ATM advertising. ATM:Ad runs ten-second ads on cash machines across the country. ATM:Ad media sales director Jack Vincent says: “The ATMs are attention grabbing and, in a sense, fill an empty moment. It catches consumers when they are focused but it is a distraction in a boring moment.”

The ads can be extended to the receipts that are given out of the machines. Some police forces used them during the World Cup to warn people to drink in moderation.

But the future of outdoor is undoubtedly in new technology such as digital escalator panels, which Viacom Outdoor has installed at Tottenham Court Road Underground station but is now being rolled out to five more stations. It is also moving into digital cross-track posters. Spencer Stratford, head of media at direct response media firm Mike Collings & Company, believes the digital panels are the future of posters. He says: “It has a lot more impact as you can tell as story as you move up the escalator.”

Glen Wilson, client services director at outdoor company Posterscope, points to the growth in TV screens in bus shelters and “bluecasting” using bluetooth technology to send consumers content when they walk by a poster site or a screen. The latter was used for the first time by record company Parlophone to launch rock band Coldplay’s album X&Y, in 2005. The campaign was developed by Posterscope using Maiden Group-owned giant Transvision screens at mainline train stations.

The success of campaigns using novel media comes from engagement, says J C Decaux group marketing director David McEvoy. He explains: “People are spending more time out of home and advertisers that use ambient media are looking to take advantage of that. They are now looking to add an extra level of interaction to build on what has gone before.”

interactive response He adds that the interactive element in bus shelter campaigns, which have buttons that people can press to see clips of a film, for instance, or to enter competitions, allow response rates to be monitored.

McEvoy says that consumers will respond to “showscreens” because they have four or five minutes of dead time, but he adds that the campaign has to suit the environment it is in and it has to offer something – through entertainment or a competition.

All outdoor media is growing and ambient media will always be at the forefront of advertising’s quirkier innovations but observers agree that advertising on sick bags and stickers in urinals are not suitable for all brands.

Ultimately, the future of the medium is going to be steered by technology. But because content is key to the campaigns, these new developments are only really working for entertainment brands at the moment.