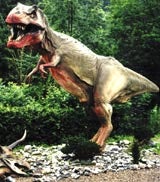 The sponsorship market is becoming tougher. Even the big boys are finding it hard to get money, so think what things are like for smaller companies.

Ever ready to help, the Diary would like to draw readers’ attention to a press release it received from Combe Martin Wildlife &amp; Dinosaur park in North Devon. The company is seeking sponsors for its new full-sized moving T-Rex, which will be 22 feet tall.

Although the Diary doesn’t know how much the sponsorship costs, Taunton &amp; Plymouth Holiday Inn has already signed up, so get your name down quickly, while there’s still time.

The Diary wishes the park good luck, and awaits its tickets for the launch event, which will include “original Seventies band T-Rex”. Given that lead singer Marc Bolan died in a car crash in 1977, one can only assume that the dinosaur will not be the only animatronic attraction present.