These will be combined into a feature-length film for next year’s Sundance Film Festival.

LG Electronics is sponsoring the project, called Life In A Day, in which people must shoot a film capturing their life on Saturday 24 July. People can upload their footage to youtube.com/lifeinaday.

Kevin MacDonald, director of films including Last King of Scotland, State of Play and documentary Touching the Void, will combine the videos into a feature-length documentary.

Ridley Scott will be executive producer and the film will be produced by his company Scott Free Productions.

Those whose footage is picked will be credited as co-directors and 20 of them will be flown to the 2011 Sundance Film Festival for the world premiere.

LG is backing the project as part of its Life’s Good campaign and to support the creation of quality online content.

Macdonald said, “Life In A Day is a time capsule that will tell future generations what it was like to be alive on the 24 July 2010. It’s a unique experiment in social film-making, and what better way to gather a limitless array of footage than to engage the world’s online community.” 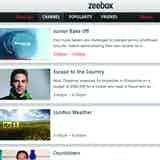 Sky has taken a 10% stake in social TV start-up Zeebox for a multi-million-pound undisclosed sum. Read the full story here.