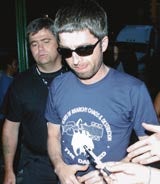 The Diary has received an excited e-mail from a PR company working for promotional pen manufacturer Rou Bill (is there anyone without a PR company these days?).

Rock star Noel Gallagher has been photographed near to a Rou Bill “Big Pen” (Why it’s called Big Pen the Diary isn’t sure. Try holding your pen in that pose. It will look as big as the Big Pen).

Rou Bill already knows the Big Pen is the superstar of pens, apparently, so the Diary can’t say whether this is a picture of Noel meeting Big Pen, or Big Pen meeting Noel. What it can say, however, is that a Big Pen can write “X” plenty of times.

Alan Hartwell is to take up the position of vice-president of marketing at Oracle UK &amp; Ireland, replacing Nick Barley, who left to head the UK marketing team at rival software company Microsoft in August (MW August 8). Hartwell will report to Ian Smith, senior vice-president and managing director for UK and Ireland, and Claus-Peter […]

Patricia Hewitt, who branded an ad for the Birmingham motor show as sexist, may not have a post-feminist sense of irony, but Iain Murray says that he certainly has