Zero-based budgeting (ZBB) is a contentious issue. Advocates talk up its benefits in ensuring marketing focuses on its strategic objectives, while detractors claim it is bureaucratic and wastes time.

Yet it is becoming increasingly popular in marketing departments, particularly at major FMCG firms.

ZBB is a way of budgeting that means marketers start with a clean slate each year, hence the “zero-base”. Rather than taking last year’s advertising spend as a benchmark for determining this year’s, ZBB assumes there is no spend and forces a CMO to justify how much budget they need for the current year. The idea is that it forces department heads and budget owners to rethink their assumptions about what will drive value for the coming year.

Unilever said it was adopting ZBB a year ago and claims it is already seeing the benefits. In its most recent results update, the company credited the practice for its strong sales.

In a company statement, the FMCG giant said its brand and marketing investment was sustained at the same level of the previous year, while its marketing spend as a percentage of its turnover declined by 0.4 percentage points due to “zero-based budgeting efficiencies”.

Diageo, which owns brands such as Johnnie Walker, Smirnoff and Guinness, was even more praising of the budgeting method.

“The culture of driving out cost to reinvest more in the business has been critical in the turnaround of Europe’s performance. Europe’s savings in overheads and marketing spend has funded investment in route to consumer, reserve and innovation.

“We’ve significantly reduced the number of media agencies we use, non-working spend is now lower and point-of-sale has been rationalised into a single platform,” Diageo CEO Ivan Menezes said during a recent results call.

Menezes added that as a result of its efficiencies, its marketing focus in Europe is “stronger than it’s been in years”, pointing to Smirnoff’s ‘We’re Open’ and Guinness’s ‘Made of More’ campaigns.

The culture of driving out cost to reinvest more in the business has been critical in the turnaround of Europe’s performance.

“The results say it all. These brands grew 3% in fiscal 2016 and 6% this half. And all of our premium core brands have gained value share in the past 12 months,” he added.

Marketing Week columnist Mark Ritson is a fan of the strategy, but claims the reason Unilever is embracing the approach has nothing to do cost cutting.

“They are doing it because they are an awesome marketing company and, unlike the vast army of muppets who populate our discipline, they know what they are doing,” he says.

“The zero-base approach is not a cost cutting method or belt-tightening approach. It’s just a better, more strategic way to plan your marketing.”

But not everyone is convinced of ZBB’s merits. It is notorious for being very labour-intensive, as the process involves finance and business leaders went through all expense line items individually.

“If people don’t have the right mindset, unnecessary expenses, like the whole marketing team attending a trade show in Las Vegas, can easily creep back in, resulting in only trivial cost savings. The exercise can also feel unnecessarily bureaucratic, which can be especially harmful to morale in more creative centers like marketing,” says Tim Raiswell, finance research leader at insight and technology company CEB.

Phil Rumbol, founding partner at agency 101 London, has experienced this first hand. During his time as marketing director at AB InBev he says he spent “an inordinate amount of time” on the phone talking people through spreadsheets.

“All the while, I wasn’t actually thinking about how I could grow the business. I’m sure there’s a good way of doing it but when done badly, it creates a whole lot of bureaucracy,” he says.

And research has revealed that the benefits are not always clear. A CEB study found that 47% of the 18 companies that used ZBB in 2014/2015 saw a significant margin improvement, compared to 45% of 40 companies that used traditional budgeting methods. That suggests results are not guaranteed. 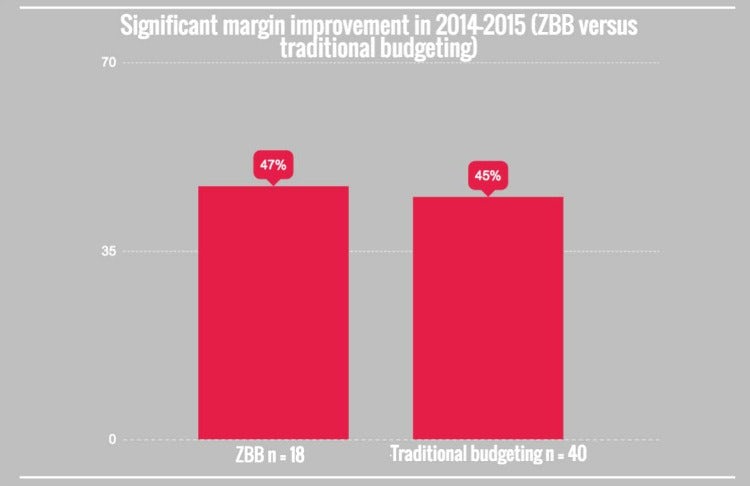 “Our research shows that in terms of time and effort, ZBB lengthens the budget cycle by approximately five days, and requires more business and finance staff to implement. In terms of results, on average, those who adopt ZBB are not significantly more likely to realise significant cost savings than those who use other methods,” Raiswell explains.

Unilever and Diageo show ZBB can work. Yet it is not the answer for every brand. Companies must weigh up if their staff have the skills and the time to implement it and ensure it has buy-in across the business.

For some brands using ZBB some of the time could also work, for example if budgets have not been evaluated for many years or if there has been a change in leadership. Other alternate between years when they ZBB and others when they adopt more traditional budgeting methods.

But amid the questions over whether ZBB works, Rumbol believes marketers must also do more to prove the effectiveness of marketing activity and how it boosts business and both the top and bottom lines.

He concludes: “If marketers were more proactive on proving the effectiveness of their marketing, there would be less of a line-by-line justification for every pound that is spent.”