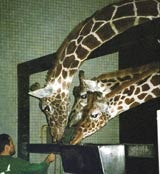 The Zoological Society of London (ZSL), the charity which runs London Zoo and Whipsnade Wild Animal Park, is looking for a new advertising agency.

The account, worth 1m, was awarded to The Reef in 2002 after a review that saw media planning and buying handed to Initiative Media (MW November 28, 2002).

However, The Reef was later incorporated into Andy Law’s Boy Meets Girl, which is now defunct. The charity says it is not reviewing its planning and buying arrangements.

It is not the first time the organisation has had to seek a new agency: prior to the last review advertising for the attractions was handled by integrated company Curio, which ceased trading in July 2002 (MW September 27, 2002).

The charity is looking at about a dozen agencies and hopes to whittle them down to a shortlist later this month. ZSL runs advertising campaigns in the school holidays in London and around Whipsnade in Bedfordshire.

The last campaign Boy Meets Girl created for the charity was a London Underground poster campaign with the strapline “Put your monkeys in with ours” for a walk-through exhibit at the zoo.

The new agency will take responsibility for the campaigns next Easter, which will run on the Tube in London, buses in Bedfordshire and local radio stations.

The Royal National Lifeboat Institution has appointed Richard Popper, a former head of marketing at Zurich Bank, as head of central fundraising and communications. His appointment comes amid a restructure of the organisation’s marketing and fundraising division and it is seeking three new marketing managers.