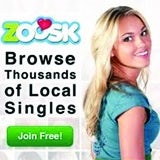 Zoosk will roll out multi-platform campaigns even outside dating sites’ traditional “on-peak” periods that tend to fall around the new year and Valentine’s Day.

The company aims target potential users with seasonal messages and approaches. In the summer holiday period, Zoosk says it will focus on mobile marketing to reach people who are not at their desktops, for example.

Zoosk is also readying its first press ads for the UK, following on from the company’s first TV ads in the territory in January this year.

Vice president of marketing Jeff Titterton says: “If by the end of the year single people in the UK think of Zoosk as one of their choices to find a relationship, I’ll be happy. It’s unrealistic to be the only choice at this stage.”

Independently-owned Zoosk launched in the UK in January and has attracted more than 50 million members worldwide. The UK is the site’s second largest market behind the US, but the company does not break down user numbers by territory.

Zoosk started as a Facebook dating app but has evolved for use on smartphones, desktop applications and as a standalone website.

The site allows users to import data from their social networking pages to build their dating profiles to speed up the registration process.

Titterton says Zoosk focuses on the excitement of dating, rather than finding the perfect partner instantly but says “we don’t want to go down the sex route”.

He adds: “Our messaging is humorous and fun, but we have to be careful about specific word choice. Words like ’casual’ can turn women off and we want to give women trust and make them feel comfortable.”