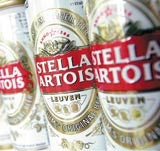 The chief marketing officer will step into his new role, which also encompasses sales, on September 1. He will continue to oversee marketing.

Interbrew UK has also realigned its board structure and promoted UK and Ireland regional president Stewart Gilliland to the position of zone president for Canada. He will be replaced by Interbrew US president Steve Cahillane.

Food giant Unilever Bestfoods has been censured by the Advertising Standards Authority (ASA) for claiming that its Knorr Vie soups provide the equivalent of three portions of vegetables. The ad, created by BMP DDB, has been labelled misleading. This is the second time this year that a food manufacturer has been rapped for making the […]

This week: marketing on the defensive; or how Kraft, the food company, and Orange, the mobile telephone network, tried to make the best of a bad situation. There is no doubt Kraft has acted smartly in coming out with a public mea culpa on the issue of obesity. By doing so, and by proposing remedial […]