John Lewis says it’s responding to a consumer desire for joy and escapism after a challenging 18 months with a Christmas advert focused on a cosmic encounter between a schoolboy and a space traveller.

The ‘Unexpected Guest’ focuses on the friendship between 14-year old boy Nathan and space traveller Skye, whose spaceship he finds crashed in the woods near his home. Intrigued by this visitor from outer space, Nathan customises his own Christmas jumper to match Skye’s space outfit, adding a star and twinkly lights.

As their friendship develops, Nathan introduces Skye to his family’s festive traditions, from decorating a tree in the woods with fairy lights to encouraging her to try her first mince pie. They watch Christmas films together and play in the snow, before the time comes when Skye’s spaceship is fixed and she must return to her home planet.

The concept, developed by creative agency adam&eveDDB, is designed to convey the magic of Christmas through the eyes of someone who has never experienced it before. The ad is soundtracked by emerging London-based singer and songwriter Lola Young, a cover of the 1984 classic ‘Together in Electric Dreams’.

The 3.7 million My John Lewis loyalty members will get to see the advert first on email from 6.30am, before the creative launches on the retailer’s website and social media channels at 8am. The TV ad will then air tonight (4 November) at 8.15pm on ITV during The Pride of Britain Awards.

As well as running across TV and social, the ad will appear on broadcaster video-on-demand (VOD) and across cinema screens nationwide.

We discussed it as a business and decided that advertising wasn’t the place for the brands to come together.

In a break with the past two years this is not a joint festive campaign with Waitrose. Customer director Claire Pointon explained both brands thought “long and hard” about joining forces for the third year in a row, but decided that to achieve “real clarity of thought” it would be better to keep their Christmas campaigns separate.

“This is two minutes to communicate what Waitrose wants to be famous for in terms of their amazing tasting food and ourselves around moments that matter at Christmas, it’s quite tricky to do that. We discussed it as a business and decided that advertising wasn’t the place for the brands to come together in that way,” said Pointon, speaking at a press preview of the advert.

Instead, the customer director believes the brands should come together in store, with John Lewis supplying the Christmas wrapping paper and cards, for example, in all Waitrose stores. This also means uniting to support families through charities Fare Share and Home-Start, partnerships that began with last year’s ‘Give A Little Love’ festive platform.

“It’s being really clear where you show up together that makes sense for the customer and where you make sure your communications are very clear as well, because otherwise someone compromises and we both want to be great brands,” Pointon added.

Creatively the advert is a break from 2020’s Give A Little Love concept, which featured nine vignettes each developed by a different artist and an original song, with an overarching message encouraging the nation to spread kindness.

“We continue to work with Fare Share and Home-Start across a number of initiatives, including foodbanks and helping families in need. The jumper you see Nathan our lead actor wear is available in adults and children’s sizes, so a whole family collection of Christmas jumpers. A percentage of sales will be going to those charities, so it’s still a big part of our plans through the full year,” said Wood.

Reflecting on the evolution of the campaign from 2020, Pointon explained that last year John Lewis had to strike the right tone to fit the mood of the nation and achieved this by focusing on the theme of kindness.

However, this year the feedback saw customers calling for a “joyful, fantastical feel” and “emotional storytelling”.

Working with the retailer’s customer panel, alongside analysis of wider industry market trends, the John Lewis team began reviewing the Christmas 2021 plan in January. Initial thoughts from Give A Little Love were that while customers loved the sentiment of the ad, others missed a sense of escapism.

The hope amongst the team was that the nation would be in the mood to look forward rather than being reminded of the pandemic. The concept was then settled on before John Lewis went into filming in September.

“When we looked at this as a script, and there were many different scripts, what we loved was the storytelling. The story of how we show up as a brand, but also space is really interesting right now,” Pointon pointed out.

“There are people going up in space, there’s lots of movies around it and it’s definitely something that is current.”

The customer insight also suggested a growing appetite for all things Christmas, encouraging John Lewis to bring the release date for its ad forward by a week. Visits to the John Lewis Christmas hub, for example, are up 50% year on year, which Wood suggested is a sign consumers are “throwing everything at Christmas this year” to make up for being short-changed by the restrictions in 2020.

John Lewis is pitching its 2021 Christmas ad as one of its “most merchandised” to date, with a twist.

“This is one of our most merchandised ads, not in the traditional sense of where we take a character and turn it into a cuddly toy or slippers, but everything you see in the scenes is all John Lewis, as are all the clothes the cast are wearing aside from Skye’s outfit,” explains Christmas marketing lead, Holly Kicul.

“What we’ve done this year instead of creating new merch is we’ve heroed our existing Christmas assortment.”

Everything from the tree decorations to the table settings in the ad are all John Lewis, chosen to showcase products consumers might not expect the retailer to sell. The idea is to show that John Lewis is not just there for gifts, but for the whole festive season.

“We’ve taken that a stage further and you’ll be able to shop the looks on social, through our paid media and on JL.com. We’re giving you hints and tips on how we style the trees and bring those areas to life, so a different approach for us but one that felt right in terms of the whole strategy,” Kicul added.

This is one of our most merchandised ads, not in the traditional sense of where we take a character and turn it into a cuddly toy or slippers.

A version of Nathan’s Christmas jumper will be available in stores and online in men’s, women’s and children’s sizes (£14-£29), with 10% of the profits for each jumper sold being given equally to Give a Little Love charity partners FareShare and Home-Start UK.

Furthermore, the retailer does not expect to encounter any supply chain issues, having ordered in “enough stock” to meet festive demand.

In store the story of the advert will be brought to life across 10 Christmas Emporiums, where shoppers will be able to get up close to Skye’s spaceship and share an interactive Gif on social media. Two Snapchat lenses are available today, the first, a selfie lens, lets the user become a space traveller, while the second outward facing lens lets users play with the spaceship.

For the first time My John Lewis Members will be given exclusive access via the app and website to ‘Unexpected Guest: The Experience’, enabling them to embody the character of Nathan and explore the world of the advert through his eyes. They will discover augmented reality characters and downloadable prizes for children, such as printable toys and activities.

There will also be hidden characters from previous John Lewis Christmas adverts waiting to be discovered, with new and exclusive content dropping within the game on a weekly basis, including behind the scenes footage.

The rollout of the 2021 Christmas advert comes just a week since John Lewis was forced to pull its home insurance ad after the Financial Conduct Authority (FCA) ruled the content was potentially misleading consumers. The ad, which shows a boy running through the house wreaking havoc in a dress and heels, was criticised by some on social media for pushing a ‘woke agenda’.

Pointon admitted she was “disappointed” with the FCA’s decision, but respected the ruling, adding that releasing advertising had changed over the past decade due to social media.

“When you launch things there are different social platforms where people are going to make comments. I’ve been working in this [industry] for a very long time and when I launched maybe 15 years ago it’s very different from today. Also, people have really high expectations of John Lewis and rightly so,” she said.

“It’s a national brand and a much-loved brand that’s in the heart of the British public, but we always go into that thinking, what are our customers going to love? And it has to be distinctive, I really do believe that. It is a very busy time and you need to be able to engage someone to really go on that journey with you. There’ll always be things that we keep looking at, that’s what great marketing teams do.” 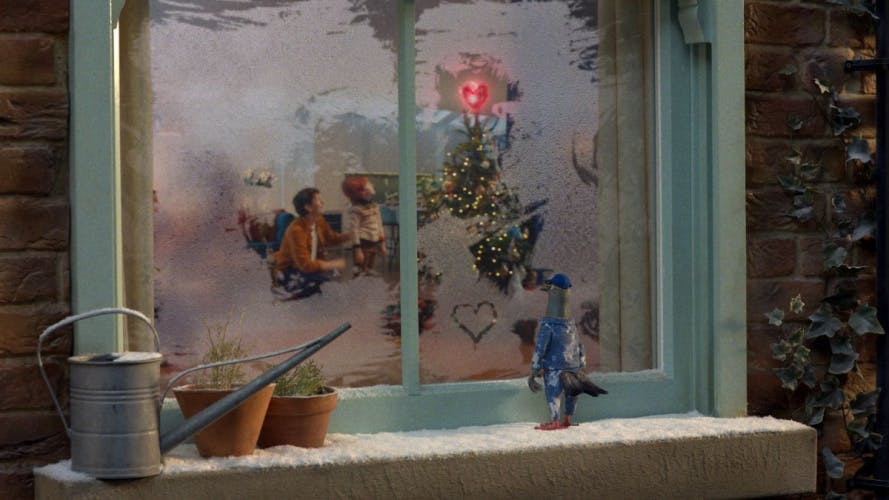 The retailers say they felt they had no choice but to do something “entirely different” this year as they look to bring their brand promise to life.