This year marks half a century since the Andrex puppy first bounded onto TV screens and took its place as one of the UK’s most recognisable and lovable brand characters. Fifty years on, the puppy remains as important an “icon” for the toilet tissue brand as ever, as it once again takes centre stage in a major new campaign.

But the puppy’s first appearance in 1972 was somewhat of a “happy accident”, UK and Ireland marketing director of parent company Kimberly-Clark, Matt Stone, tells Marketing Week.

The Advertising Standards Authority (ASA) banned Andrex’s original ad concept, in which a little girl ran through her house trailing a roll of toilet paper, arguing it would encourage wastefulness. At the eleventh hour the girl was removed from the ad and replaced with a golden Labrador puppy.

The puppy played a significant role in boosting Andrex into the market leadership position, which the brand has held ever since. Andrex currently claims a market share of over 30% and there are no plans to put the puppy to bed any time soon.

“It’s a really important brand equity mark,” Stone explains. “It’s a really consistent memory structure and a lot of brands spend a lot of time looking for a piece of mental availability or icon like that, so we’re really lucky.”

The puppy serves as an “instant cue for the brand”, he says, adding: “The puppy is Andrex and Andrex is the puppy. The ability to cut through and drive brand recognition very quickly, just by having an icon that stands for the brand, is really important for us.” Is it time for a brand character renaissance?

Brand characters have somewhat fallen out of fashion as a marketing tool, with their use in TV ads having dropped significantly in recent years. In 1992 mascots featured in 41% of UK TV ads, compared to just 7% in 2018, according to data from System1.

Stone admits mascots can often fall into “gimmick territory” and fail to become a fundamental part of the brand, resulting in limited impact. “That’s where it’s done wrong,” he says.

However, for Andrex the puppy isn’t just a “random mascot”, but a “metaphor” for its products, Stone explains. Puppies are soft and comforting to the touch, the same qualities the brand claims makes its own products superior.

“That combination of doing it consistently to the point that it becomes embedded in people’s memories, but also having a reason for why you have an icon or mascot and how it can communicate what your actual product is, is what I think makes [a brand character] strong and is where people can win,” Stone says.

“When done right, it becomes such a clear memory structure to enable fast brand recognition and that’s how brands grow.”

The effectiveness of the Andrex puppy as a marketing tool has never wavered, Stone claims. While there may have been occasions when the brand attempted to try other directions, it has always ended up back with its four legged friend.

There’s definitely a really important role for investing in maintaining that trust and equity, and being top of mind for people. So we continue to invest in brand building.

In fact, the public tends to get quite upset with Andrex when it leans away from the golden Labradors. In 2013, the brand sparked the ire of fans by dropping the word ‘puppy’ from the Andrex Facebook page title.

“It’s really amazing the power it brings, and the nostalgia and heritage it brings up is equally important. Children that grew up with the Andrex puppy on TV as kids are now parents themselves, and that equity stays. So it’s a very strong part of our brand,” Stone says.

“It’s an important little puppy, because it stands for a lot. It’s really important that we consistently utilise it, as it is such a great memory structure and a great way of driving brand affinity.”

The latest puppy-fronted campaign, ‘A little love goes a long way’, launches today (1 September) on TV, video-on-demand, print, digital and social media in the UK. It comes not only as Andrex hits 50 years of the puppy, but also its 80-year anniversary as a brand.

Earlier this year, Kimberly-Clark revealed plans to boost its marketing investment to support price rises across its brands, as it looks to offset the “majority” of cost inflation this year.

Indeed, Stone says this latest Andrex campaign is the biggest launch the brand has done for “quite a long time” in terms of investment.

“There’s definitely a really important role for investing in maintaining that trust and equity, and being top of mind for people. So we continue to invest in brand building,” he explains.

Created by creative agency FCB Inferno, the campaign is based on consumer insight indicating that small, everyday acts of care – like buying quality toilet paper – can make a real difference to how a customer and their family feels.

In the 30-second TV ad (watch above), a mother spots a puppy on a store shelf where Andrex’s toilet roll packs would normally have been. She and the puppy share a moment, before she picks it up and puts it in her trolley, revealing it to be a normal pack. In the final shots her daughter is shown to be heavily pregnant, suggesting her choice was a small act of love.
Kimberly-Clark to support price rises with increased marketing spend

Stone believes this message is “even more relevant now than ever”, as UK consumers battle with the cost of living crisis.

“Ultimately we make toilet roll, so we don’t want to overplay our place in life…We’re not trying to change the world,” he says.

As part of the campaign, the brand is running a social and shopper competition, ‘#PawsOnAPup’, which gives shoppers a chance to win their own cuddly Andrex puppy by scanning a QR code on packs. At one stage in the past, as many as one in 10 UK households had a toy Andrex puppy, Stone claims.

“It’s a great way of getting our brand in the home,” he explains. “There’s a lot more to come on that going into next year as well. The shopping experience isn’t always the most fun, particularly for parents, so if we can add some enjoyment to it then that can only be a good thing.”

For Andrex, the overarching marketing strategy right now is to ensure the brand is “as useful and valuable to families as possible”, Stone continues, which is manifesting in a number of different ways.

Alongside the hero film, the 360-degree campaign includes TV, press, digital and social assets highlighting the launch of Andrex Classic Clean Mega, a 50% longer roll of toilet paper than the standard product.

The new product is a way for Andrex to give additional value back to its customers, Stone explains. Consumer testing shows the longer lasting rolls are “really valuable” to people, as changing rolls less often is seen as more convenient.

On top of this, Andrex has spent “a lot of investment” in raising its product quality to a consistently high level, he says. But the strategy goes beyond just product.

When done right, [a mascot] becomes such a clear memory structure to enable fast brand recognition and that’s how brands grow.

The brand is increasingly investing in initiatives and services which “add value to society” and support customers through life changes and times of struggle, including its partnership with charities Bowel Cancer UK and In Kind Direct.

“Between fundamentally investing in the product experience and then looking for those additional value cues, that’s how we’re building up the value equation with consumers,” Stone says.

As consumers find their discretionary income squeezed this year and next, Stone admits some customers may trade down to cheaper products regardless. However, the strength of the brand should see it through the storm, he adds.

“Andrex won’t be for everyone all of the time, otherwise we’d have 100% market share. Lots of people will have to make different choices. But we’ve seen previously that when times are tough, people do turn to trusted brands…because they’re a known quantity and you know what you’re getting,” he explains.

“The quality we offer, the trust we have, is really valuable to a lot of people. And ultimately that’s what we’re trying to do, to make sure we provide the most valuable experiences to people in many different ways.” 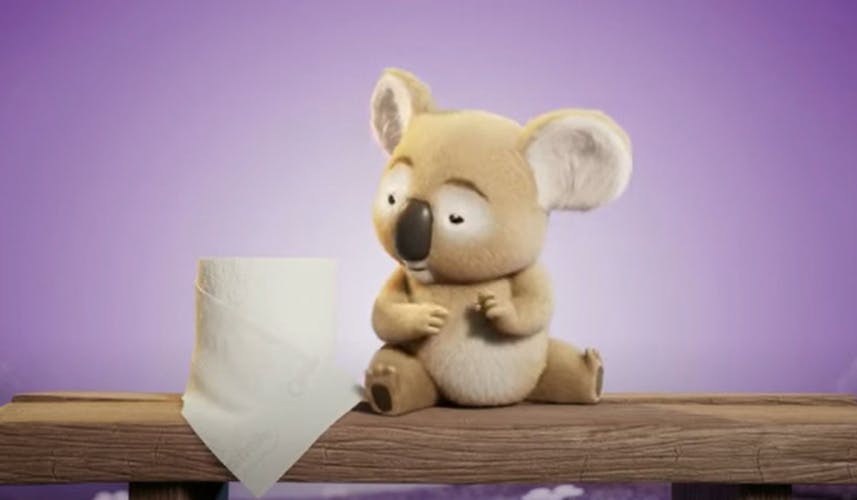 Adopting a confident position, sticking to the plan and building relationships has helped Cushelle in its mission to change the makeup of the toilet paper sector.