The latest grocery share figures from Kantar Worldpanel for the 12 weeks ending 19 July show Sainsbury’s market share at 16.5%, edging it ahead of Asda at 16.4%. While sales at Sainsbury’s fell by 0.3% compared to a year ago, Asda saw a bigger decline at 2.7%, making it once again the worst performer of the “big four” supermarkets.

Asda has been the second largest supermarket since August 2003 although it was overtaken by Sainsbury’s over Christmas 2014 when shoppers traded up. This marks the first time in 12 years Sainsbury’s has pipped Asda to the number two spot outside the festive season.

Kantar credits Sainsbury’s non-food sales, convenience stores and the fact that more of its shops are in the south of the country where the market is growing faster as reasons for it overtaking Asda. By comparison Asda has little presence in the convience sector and more of its stores are in Northern England.

The Co-operative also had a strong period, with its focus on its convenience business boosting shopper numbers by 133,000 and helping sales to rise by 1%, their first increase in a year. Its share remains at 6.3%.

Waitrose also saw sales accelerate to 3% as customers took advantage of the launch of the “Pick Your Own Offers” initiative. Iceland’s sales were also up by 3%, coinciding with its recent “Power of Frozen” ad campaign. 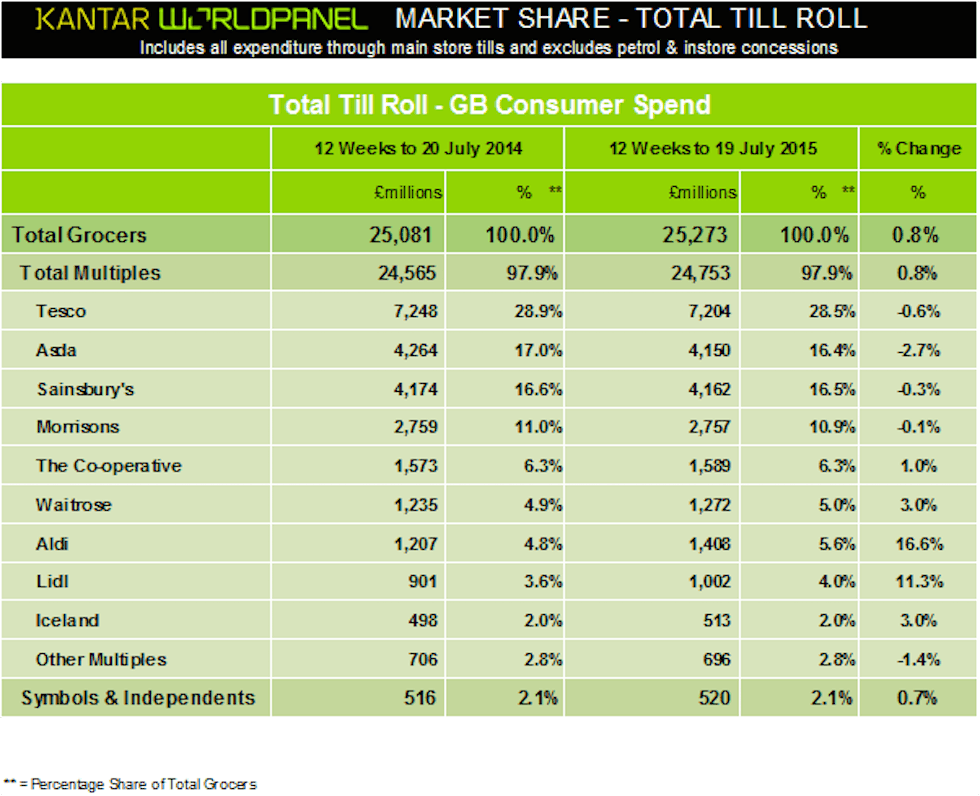 Fraser McKevitt, head of consumer and retail insight at Kantar Worldpanel, says: “The continued slow growth of the overall market can be explained by minimal volume growth and lower like-for-like prices, both as a result of cheaper commodity prices and the fierce competition between supermarkets.

“Comparable groceries are now 1.6% cheaper than a year ago, meaning prices have been falling since September 2014, although they are projected to start rising again by early 2016.”

Sainsbury’s marketing is failing to connect with consumers if the latest brand tracking data is anything to go by.

Merlin says the strength of its brands will help the company recover after it cut down on marketing and promotions in the wake of the rollercoaster crash at its Alton Towers theme park. It said the tragedy could hit profits by up to £47m.