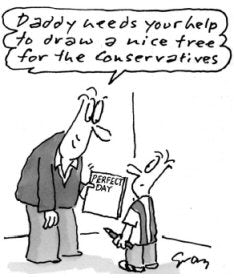 In 1877, when James McNeill Whistler’s painting of a fireworks display was exhibited, Ruskin erupted with indignation. “I have seen, and heard, much of cockney impudence before now”, he said, “but never expected to hear a coxcomb ask two hundred guineas for flinging a pot of paint in the public’s face.” Whistler sued for libel.

Fast forward to the present day, and Mr Lay takes up his pen, heavily laden with irony, to condemn the Conservative Party’s new logo. “I would like to congratulate the design company,” he writes to The Daily Telegraph. “To persuade the Conservative Party, which is allegedly short of funds, to spend £40,000 on a new logo that my neighbours’ four-year-old child would have done for nothing is brilliant.”

Whistler won his case, but was awarded token damages of only a farthing. The trial, however, produced a famous exchange. Ruskin’s defence counsel asked the artist: “The labour of two days is that for which you ask two hundred guineas?” He replied, “No. I ask it for the knowledge I have gained in the work of a lifetime.”

The similarity between the two events does not end there. Perfect Day, the company that designed the Conservatives’ new logo, has been in business since 1999, which, in the world of public relations and allied trades, is a lifetime. Moreover, it shares Whistler’s total absence of either self-doubt or seemly modesty. Its website proclaims itself as “a very fine company specialising in every conceivable aspect of creative communication”. No sooner has the reader time to swallow that mouthful than he is fed another. “Our clients vary massively – from huge, blue-chip companies to small family firms. We care deeply about each and every one of them.”

Quite where the Conservatives fit into that massive variance is a matter of personal judgment, but going by its membership figures it is probably to be found at the small, family-firm end of the spectrum. No matter, it can take comfort in the knowledge that the love of Perfect Day, like that of the Lord Himself, passes all understanding.

Perhaps its deep steeping in the well of caring and understanding explains its peculiar fitness to craft a logo in the shape of a green oak tree, a symbol of the enduring strength and beauty of Nature to which every heart responds. So, out with the Thatcherite beacon of freedom, hope, and daring challenge and in with soft, green-leafed optimism, a compassionate evocation of the Eden from which market economics and privatisation expelled us.

So much for the symbolism, but what of its execution? Mr Lay and others take exception to the tree because, in their opinion, it is “scribbled” or “doodled”. What they fail to see is that in those simple lines speaks the experience of a lifetime, or at any rate of eight years. True art always looks simple to the untutored eye, which is why great exponents in any field make their work look ridiculously easy. Anyone who saw Gary Sobers stroke a ball, inside-out, to the boundary, or who has watched Ronnie O’ Sullivan clear a snooker table in the time it takes to tie a shoelace has witnessed the impossible made effortless. And so it is with a scribble that makes art of artifice.

The new Conservative logo may look like a hasty pencil sketch to you and me, but it reeks of creativity. It is not cool to be figurative or fussy. Why paint leaves on a tree when with a rapid outline one can “suggest” them? As for the £40,000 fee, it is quite simply a measure of worth. True, Mr Lay’s neighbours’ four-year-old son would, if asked, produce a near-identical depiction of a tree and expect no greater reward than a jam sandwich, but he would lack understanding. In his innocence the picture would be no more than a tree. To Perfect Day and to the Conservatives, it is a “new beginning”. Children have literal minds. It is only to adults that the power of symbolism is revealed, and that comes at a price – £40,000 in this instance.

So let us hear no more of scribbles and daubs. The language of marketing is complex and what might strike the layman as an artless piece of rapidly executed nonsense is by the deeply caring practitioner wrung from the brow in beads of blood. Was Rome built in a day? Was “quote me happy” an idle flippancy? Was FCUK crafted in an instant? Only an innocent could believe such things.