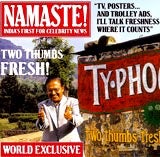 Premier International Foods is set to review the media accounts for all its brands, including Typhoo Tea, Cadbury’s Highlights and Toppers, HP Beans, Chivers marmalade and Hartley’s jam.

BBJ currently handles the media buying and planning accounts for most of Premier’s brands, which together spend &£6m on advertising.

A review of Premier’s creative roster is already under way following the appointment of Ivor Harrison as group marketing director earlier this year.

It is understood that Harrison will review the media accounts once the new creative roster is decided.

The roster is expected to be finalised in the next few weeks. The review was called following Mother’s decision to resign the &£3.5m Typhoo Tea account following “differences of opinion” over the future direction of the ads.

The pitch was set to include Delaney Lund Knox Warren &amp; Partners, the incumbent on Cadbury’s Highlights, and Willox Ambler Rodford Law, the incumbent on HP Beans and Smash. Two other agencies were also believed to be involved. The account for Lloyd Grossman sauces is staying with Communications Plus.

The Industry Standard Europe (ISE) magazine has closed after just six months, another sign of US retrenchment in the face of a weakening global Internet economy. The London-based new media magazine’s US owner, Standard Media International, has come under fire for not making strategic cuts earlier and thus preventing the sudden closure of its European […]

It is often assumed that economic convergence, and the introduction of the euro, will homogenise European consumer culture. New research throws that prediction into doubt. John Shannon reports

Eurostar poster ads have been dubbed “offensive” and “full of sexual innuendo” by complainants to the Advertising Standards Authority. The ASA is deciding whether to launch an investigation into the complaints. Two of the ads – one of which shows a group of naked people running towards a beach with the strapline “For why why […]