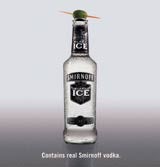 The Smirnoff Ice advertising spend in the UK was &£6.7m for the 12 months to September 2004, according to Nielsen Media Research, while it is understood that the budget for the rest of the world is $15m (&£7.9m).

The move follows the appointment of BBH to the Smirnoff Ice advertising business in the US in November (MW November 18, 2004).

However, JWT’s hold on the parent Smirnoff account is not under threat. The president of global marketing for the brand, James Thompson, says: “We are 100 per cent committed to working with JWT on the global Smirnoff vodka account. This business is not up for review.”

Leo Burnett Worldwide will support BBH, providing advertising services to Diageo subsidiaries in countries where BBH does not have a presence. Leo Burnett owns a 49 per cent stake in BBH.

A new campaign for Smirnoff Ice is planned for the spring. BBH also works on Baileys, Gordon’s Gin and Johnnie Walker.