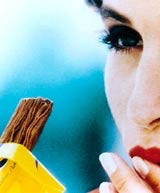 Cadbury is planning to turn top-selling countlines – including Crunchie, Fudge and Flake – into ice cream brands to take on rival Mars’ range.

The brands will be produced under licence by Frederick’s Dairies, which has started manufacturing a range of Cadbury brand extensions, including Dairy Milk ice cream on a stick, launched earlier this year.

Cadbury chief executive John Sutherland revealed the plans last week in the company’s interim report. He also announced that Cadbury has a £3bn war chest for acquisitions, which are likely to be outside its core areas of soft drinks and confectionery. The company was recently linked with US biscuit manufacturer Keebler after missing out on the purchase of Nabisco.

Mars first launched into the sector in the early Nineties and now has about a 27 per cent share of the £650m impulse ice cream market, according to TN Sofres Superpanel, with brands such as Mars Bar, Twix and Snickers.

The decision follows Competition Commission recommendations earlier this year that Birds Eye’s distribution policy was anti-competitive and unfair to rivals such as NestlÃ© and Mars.

Byers said Birds Eye had “undertaken not to sell its impulse ice cream direct to retailers [other than national accounts] and to distribute it through independent wholesalers on non-exclusive and non-discriminatory terms”.