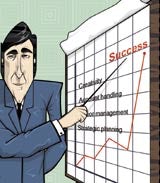 Tequila/London has emerged from its controversial merger to claim top spot in this year’s survey, as marketers see the benefits of its multi-disciplinary expertise – this year’s trend. By David Reed

If observers from within the agency world were to be believed, this was most definitely not Tequila’s year. It began with the TBWA/GGT merger, trumpeted as a genuine case of strategic synergy but criticised by some as just another example of corporate cost-saving.

Clearly the positive view has prevailed, at least among the 300 clients who rated Tequila top across all categories. And with the agency coming out top in three of the eight criteria on which agencies were ranked, this was a definitive achievement.

The agency’s joint chief executive, Tim Bonnet, admits that the year has not been plain sailing. “Bringing together 260 people creates its own atmosphere. But it seems that all the reasons for the merger were right and it was not just corporate restructuring,” he says.

Helping to ease the merger was the fact that both agencies already used the same planning tools, called Connections and Disruptions, and had similar philosophies. But their separate positionings were very different.

“GGT was renowned for its creative product and exceptionally strong planning. We also had strong planning, but the combination of the two gives breadth and strength in both planning and creativity,” says Bonnet.

This could account for Tequila’s significantly improved ranking on creativity – it rose from 12th last year to fourth this – while it took the same position for planning ability, up from ninth in 2004. Bonnet will no doubt also take satisfaction from the fact that quality of senior management was one of the areas in which the agency came out on top.

But in a difficult trading year for all agencies, the net effect has not been real growth. “It has been a tough year with existing clients where there have been large budget cuts. That is one of the hardest things – we have been exceptionally strong in new business, but we are just replacing budget lost from existing clients,” says Bonnet.

Taking clients to the theatre could prove to be a useful move. Part of the inheritance from the merger is the ongoing sponsorship of the Soho Theatre. This has seen a two-month Disruptions season, involving six specially commissioned â¢ pieces all connected to marketing or the media. Sponsorship of the D&amp;AD’s Young Talent DM award also payed off, with the agency hiring the two winners.

If Tequila is proving that you can successfully merge two disciplines, then it may have learned the lesson from Euro RSCG KLP. Its ranking has improved dramatically, taking it to second position from 14th last year – multi-disciplinary agencies appear to be flavour of the year.

At the start of 2005, the agency picked up Total as a client. “That is a really good account for us as it is full service, from DM and sales promotion to point of purchase and interactive. It is a good example of a client using all our skills,” says managing director Hugh Treacey.

With no account losses and additional business from existing clients such as Pepsi, Britvic and Diageo, Treacey notes/ “We certainly had a good year.” And he credits the multi-disciplinary nature of the agency with much of this success.

“That’s how we’re doing it, by practising what we preach. We don’t departmentalise marketing disciplines. Our DM and sales promotion experts all work together and collaborate for the benefit of the client. That model is really working for us,” he says.

But it is by no means the only way to win a good reputation. Making what is arguably a late entry into the top ten, Harrison Troughton Wunderman jumped to seventh from 21st position. This is belated recognition for an agency that has gained more creative awards overall than its nearest rival (which happens to be Tequila/London).

Not one to be satisfied with past results, managing partner and creative director Steve Harrison says: “We realised we had to raise our creative standing. But for clients, that isn’t enough.”

Consequently, this has been a year for concentrating on serious business, leading to account wins from Hotels.com, Rolls-Royce and Samsung among others. To support this, there â¢ has been a substantial boost for the agency’s planning department, including the appointment of David Reed (no relation to the writer), formerly head of planning at EHS Brann, where he was responsible for Tesco Clubcard; and John Howkins, formerly at Rainey Kelly Campbell Roalfe/Y&amp;R, where he worked on Range Rover.

Harrison says this is part of a deliberate plan to expand HTW’s senior management team. “We were too dependent on the H and T, so we have made a real effort to broaden our capabilities through new hirings,” he says.

Another addition has been John Williams, formerly head of digital at Publicis Dialog, and the man responsible for Hewlett-Packard’s much-praised Hype Gallery. Harrison says of digital: “I’ve never been good at it,” so Williams’ appointment is a strengthening move.

“We had a good year on the creative front in what has been an unexpectedly tough period. Now we want to be as good at planning and full service as we are at creative. We are pursuing pre-eminence in all disciplines,” says Harrison.

The integrated proposition has also helped to push Chemistry into ninth spot, up from 16th last year. It focuses on customer relationship management – a dirty word to some direct marketers in recent years, but a field many clients remain keen to exploit.

In common with other strong performers in this year’s survey, Chemistry has boosted its planning capabilities in 2005. New planning tools and methodologies have been developed, while additional hirings have brought new skills to bear.

“It doesn’t matter what channel clients are working in – we don’t say it has to be a DM proposition. It is about analysing consumer behaviour and the client’s objectives, then solving those in an integrated manner,” says group client services director Nick Baggott.

An important element in this process has been the arrival of Robin Jaffray, formerly a senior planner at McCann Erickson. He brings a brand background to add to the agency’s data and below-the-line planning skills. This is helping to deliver the kind of strategic work that Baggott says the agency is being asked for.

It has also helped to improve Chemistry’s creativity, he asserts. “For instance, with Transport for London we’ve had a tremendous success with Everyone’s London. It is the biggest below-the-line programme TfL has run and is very high-profile,” says Baggott.

While the campaign was an answer to a serious problem – the need to encourage tourists and shoppers to visit London after the July bombings – the agency has also been running more light-hearted programmes. Baileys Pleasure Society, for Diageo, came out of a consumer insight into reasons people don’t drink the liqueur and created a women-oriented marketing campaign to address this.

Baggott says both these projects are typical of what Chemistry aims to deliver. “We score very well with clients looking for strategic change. They are looking for an agency to make a case which is insight-driven, rather than ruled by a particular discipline,” he says.

With the entry of WWAV Rapp Collins London into the top ten – another case of long overdue recognition – there is further proof that brands want marketing solutions that combine the best elements of DM with genuine insights into their brand. The agency works for the likes of Sony, Somerfield and Capital One and this year picked up work for Wanadoo and British Gas.

“We’re working very successfully with brands, but we still have a strong focus on classic fundraising and financial services DM clients. Our development into the broader areas has been taking place over the last couple of years,” says Rapp Collins Europe chief executive Chris Gordon.

This has seen the agency start working on activities ranging from in-store promotions through to classic direct mail and on to digital. Much of the success of the London agency has been attributed to its chief executive, Marco Scognamiglio, who Gordon says is, “very creative in leading the agency in new directions”.

This is reinforced by the role of Ian Haworth as chairman. “It has made a big difference for us to put a creative director in as chairman. It has been very important in gaining recognition that creativity is not just puff, it is critical for our business,” says Gordon.

If anything can be gleaned from this year’s results, it is not just that DM agencies are no longer bound by simplistic definitions of what their discipline can deliver. Rather, it is that agencies really are a people business. It may be an old insight, but it is as relevant as ever.