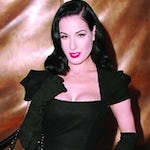 The virals, created by Ogilvy, are released his week, and can be viewed online where users are invited into the Perrier “mansion”, where they are greeted by Von Teese who asks them to: “Pick one. Find me. I’m not far”.

Viewers are given the option of two doors – one called The Dark Room and the other entitled Roll The Dice, where they can view titllating footage of the stripper.

Users also get a chance to keep a memento of their “visit” to the Perrier mansion when Von Teese hands them a virtual camera and invites them to take pictures of her in varying states of undress.

To mark the campaign, Perrier has released a limited edition version of its cans and green teardrop-shaped bottles with Von Teese’s image.