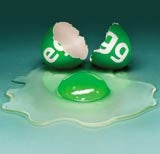 Morale has reached rock bottom at Egg and doubts are being cast over the online bank’s future.

Cracks are beginning to show in the marketing department, which has been hit by a series of departures. In the latest exodus, brand director Richard Taylor and sales director Richard Cole have followed former marketing director Jerry Toher to rival Mint, which is responsibilities, has asked for her role to be split in two, sparking a search for a new chief brand officer.

Insiders claim that staff are demoralised because the future of the bank looks uncertain. The arrival of new Prudential chief executive Mark Tucker has done little to boost morale, as he is thought to be keen to sell off Egg because it does not form part of the insurance giant’s core interests. MBNA was understood to be interested in buying the online bank until its recent purchase by Bank of America.

Tucker’s predecessor, Jonathan Bloomer, was given short shrift by the City for failing to find a buyer for the online bank, which had been put on the market for &£1.6bn. Instead Bloomer had to settle for getting rid of the French arm to Accord in October last year, for &£96m. Including its French business, Egg made pre-tax losses of &£107m in 2004.

However, following the sale of the French arm, as well as &£12m in cuts made to the rest of the business, group operating pre-tax profit for the first quarter of 2005 went into the black at &£5m, compared with a &£3.9m loss for the same quarter the previous year.

Out of fashion, out of mind

Rumours are rife that new Abbey owner Banco Santander Central Hispano will fold online arm Cahoot into the main brand. Cahoot, which has 180,000 current account customers, made a loss of &£17m for the 12 months ending June 2003, and the new bosses have made no secret of their wish to streamline Abbey’s brand portfolio.

There are other signs that confidence in online banking is waning. HBOS sub-brand Intelligent Finance, which made a &£38m loss in the first six months of 2003, has rationalised its product portfolio by scrapping its offset credit card owing to heavy operating costs. Web-based Zurich Bank, introduced to the UK by insurance company Zurich, and Dublin-based e-first have already fallen by the wayside. But a spokesman for Co-operative Financial Services’ online arm Smile insists that it continues to prosper with a customer base of more than 500,000.

John Allert, chief operating officer of branding consultancy Interbrand, which acts as strategic advisor to Egg, says being online is no longer the “novelty” it once was.

“The salience or viability of specialised internet banking offers is moving forward. Egg and other brands have long since recognised that online banking is not a proposition to customers in itself.”

High street banks have launched their own online operations under their main brands. Of Barclays’ 14 million customers, 5 million have signed up to its online banking service, while Lloyds TSB Online Banking has more than 3 million registered users. Lloyds has also introduced e-statements and a mobile phone text service to alert customers of their balance and overdraft status. Unlike Egg, these high street banks have a bricks-and-mortar base to give extra support.

Casting a net over the big boys

Among the smaller high street players, Alliance &amp; Leicester’s new online account has proven to be so popular that it has been closed to new customers. The building society sees the internet as a way of competing with larger high street banks without increasing its branch network exponentially.

High street banks have also followed Egg in offering rate-busting products. But all are finding that the tactic of offering market-beating rates on some of their products, in the hope that consumers would buy into others, is no longer working as consumers are shopping around, holding different accounts with a variety of providers.

Allert says it was Egg’s brash assault on the scene in the late 1990s with its nought per cent credit card that shaped the current financial services landscape: “Egg was arguably the first inertia-buster in terms of the high street credit-card market and arguably a victim of its own success. It asked people not to be loyal to the high street banks. Now customers have taken that one step further and they are no longer loyal to anyone, including Egg.”

Former Cahoot marketing director Deborah Cutler says that few would be tempted to launch a standalone brand now. She comments: “There was a proliferation of new brands five years ago: some have survived, some haven’t. We are unlikely to see any new entrants coming along now.”

Cutler warns that online banks have to change direction to weather the storm: vying not only to acquire and retain customers, but to keep their accounts active. However, she adds that high street banks, with their heavy current account base, are more equipped to do this.

Egg on the turn?

Despite such an apparently negative outlook, Egg remains defiant. A spokeswoman acknowledges the difficulties it and other Web-based financial services face and that the honeymoon period is over, but is adamant its ethos of innovation will win through.

“It is a seminal turning point for Egg,” she says. “The challenge is to find the next step. We have to continue to be a trailblazer; we have to find the next thing that wasn’t there in the market in order to get another big boom. We were fortunate enough, or expert enough, when we launched on the internet. The next revolution will not be as big, but there is still scope there.”

Insiders at Pru, though, believe in order to achieve this there must be a firm statement of intent over the brand’s future. Uncertainty and a feeling of not being wanted by Prudential, which owns 79 per cent of Egg, threaten to destabilise the brand further.

Allert says that despite question marks over its future ownership, Egg has steadfastly pursued a strategy over the past 12 months to ensure that it is “as well-placed as it can be”.

However, he concludes that separately branded online banks may have had their day as many high street banks have launched online operations under their main brands: “I would think that in another two or three years, of the first wave of internet brands, Mint and Egg will be the only survivors.”

It’s a far cry from the heady days of the late 1990s, when online banks triumphantly crowed about the demise of the traditional bank brands. As one online bank insider now confesses: “The future of internet banking lies in the hands of the high street.”