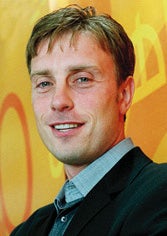 Former Orange and ITV Digital marketer Dale was promoted to the role of vice-president of marketing for mobile devices last year (MW March 28, 2007). Previously he reported to Keller, but will now report directly to Brown, who is running the mobile phone division in addition to his group responsibilities, following the departure of Stu Reed.

Conrado heads up marketing for the rest of the company, which sells products such as television set-top boxes and wireless network equipment.

Dale joined Motorola in 2005, having left Orange the previous year. Prior to that, he was marketing director for ITV Digital, where he launched its high-profile “Monkey” campaign with Johnny Vegas.

Keller, a former Heinz and Procter & Gamble marketer, joined Motorola in October 2006 to replace Geoffrey Frost, who died at the end of 2005. But the company has struggled to replicate the success of its Razr model and has lost share to rivals Nokia and Samsung.

Motorola said in January that it was looking at options including selling its mobile phone unit. Former chief executive Ed Zander was ousted at the end of last year and replaced by Brown.

New rules are being introduced this spring allowing National Health Service providers to advertise their services. From April, hospitals, NHS Trusts and clinics will be permitted to target the public with marketing campaigns as they compete under the Patient Choice agenda. This allows patients to choose where they are treated from a list of four […]

Fred Reichheld’s 2003 article on the Net Promoter Score may have been adopted by large companies, but it really is not much use to marketers

Media Planning Group has scooped the 20m Nationwide media account from incumbent Mediaedge:cia, which had held the business for 12 years. Head of brand strategy Peter Gandolfi says MPG’s digital credentials were “key” to the appointment.