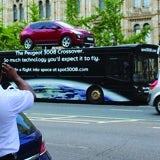 The campaign, which is primarily online, invites people to spot 20 Peugeot 3008 Crossover cars hidden in the what is billed as the world’s largest online 360 degree panoramic image – an 80-giga-pixels panoramic image of London. Winners are entered into a prize draw to win a flight into space.

The £1m campaign will also run in the press, posters and radio

The campaign will also feature Peugeot 3008 cars that have “landed” on well known buildings in London, Birmingham, Manchester, Glasgow and Bristol. The Peugeot 3008 is also perched on top of a tour bus.

Wand Agency has designed the campaign, which will run until September.