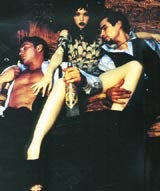 Rainey Kelly pitched against DDB London and McCann Erickson. The premium Russian vodka, owned by United Brands, is already widely available across Europe and the company is trying to boost its appeal in the UK.

The Russian company produces a range of vodka drinks, including a chocolate-flavoured spirit which was the first such drink to be sold in the UK when it launched in 2001. The range also includes a blackcurrant-flavoured vodka and a pepper vodka.

Kremlyovskaya, or Kremly, is one of the most popular vodkas in Russia, where it is known as the “vodka of the Kremlin”. It is also sold in Belgium and Spain.

Ikon, Jones Knowles Ritchie, Turner Duckworth and Williams Murray Hamm have been appointed to food company RHM’s design roster. The appointments, which are effective immediately, follow a pitch in April.

Looking back, Ofcom’s Solomon-like judgment on the vexed subject of broadband access may well seem historic; the origin of a historic marketing opportunity, that is. At first sight, nothing could be drier than the tussle over who controls the ‘last mile’ or ‘final loop’ of telecoms cable into people’s homes. Currently, it is the exclusive […]

Although VCRs were expected to revolutionise TV watching, their impact was surprisingly small.