Space, inner and outer, was the winning theme of this year’s Epica creative awards, the 20th in the series.

Top prize on the print side went to Scholz & Friends for Jobsintown.de. This was a first in a number of ways/ a first, certainly for Scholz; a first, more surprisingly for Germany, which has never up to this point won an Epica d’Or; and a bit of a first for a recruitment agency, not generally considered the most promising type of client for creative excellence.

Cynics would say (not wholly maliciously) that standards of creativity in print are not what they were. But the truth is the winner made exceptional use of the everyday – the sides of photo booths, vending machines and ATMs – by means of trompe l’oeil posters. The pictures showed real people drudging away in the claustrophobic inner compartments of these machines, a metaphorical canvas for their lacklustre current jobs. The slogan in each case was: “Life is too short for the wrong job.” Simple, but effective. 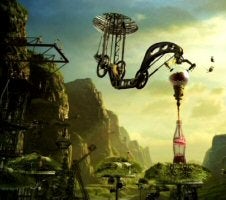 Triumph in The Happiness Factory
And so from office space to the inner space of imagination, and the other Epica d’Or winner – for film. This was a first, too: for Coca-Cola, but not for its agency Wieden & Kennedy (W&K), which took the top prize with “the Wall” in 1994 and again in 2003 with “Musical Chairs”- both work for Nike.

The Happiness Factory is Coke’s first global campaign since 1996 and strives to put fizz back into a potent brand – though one bestriding a diminished sector, carbonates.

It’s certainly a heroic departure from the usual stuff that survives the mind-numbing scrutiny of Atlanta, being 60 seconds of almost uninterrupted fantasy. Man throws coin into vending machine, coin plunges down a waterfall and so do we, into a Pythonesque wonderland peopled by animated pygmies who make up the workforce of a Heath Robinson factory, all skillfully choreographed around a single task – preparing the man’s bottle of Coke. In the final scene, the bottle rolls out. As man walks away, clutching his drink, he glances enigmatically at the vending machine. Has he understood the mystery of Coke or not? 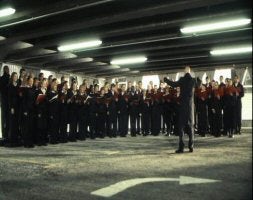 Sing When You’re Winning
Honda’s Choir, which won in the automobiles category and was devised by W&K (in this case the London office) ran the Happiness Factory a very close second for the top film prize. And it is instructive to compare and contrast the two contenders. Honda’s offering comes from a distinguished school; we’ve already had major prize winners in Cog and Grrr. Choir, as you might expect, is beautifully orchestrated and forces you to concentrate on what is usually the ancillary medium in television or cinema advertising: sound. But though a strong idea neatly put across, it lacks the visual brilliance of other Honda work, or indeed the Coke work. Some accused it of being ever so slightly smug.

The Best of the Best
The Epica d’Ors are drawn from existing category winners, all voted on by a panel of over 20 judges recruited from leading national trade magazines – a unique feature of the awards scheme. Coke, for example, also won the non-alcoholic drinks category, while Jobsintown took the prize for media innovation.

As can already be deduced, the British have done rather well in the rush for gold. UK agencies won the top number of first prizes, 15; and came second only to Germany in the number of total awards won (62 to 81). Other countries to score highly were Sweden (four golds, 61 winners), and France (6 golds, 60 winners). Germany and the Netherlands both won 7 golds, putting them second behind the UK.

As for agencies, it was definitely annus mirabilis for W&K which had five winners, one of them the Epica d’Or, from only two countries. DDB, last year’s most successful network, also had five winners. But top agency overall was – for the third year in a row – TBWA/Paris.

At the World Economic Forum in Davos this week there’s a new idea on the agenda –  neuroscience. At first sight, how the human brain works seems a far cry from global politics and economics. But world leaders are increasingly realising that the way people think and feel lies at the heart of politics and […]

Coca-Cola is axing its global marketing team just days after chief global marketer Mary Minnick announced that she was leaving the company to pursue other goals. The soft drinks giant is now planning to divide reporting lines with innovation and strategy reporting to chairman and chief executive Neville Isdell and marketing reporting to president and […]

The BBC’s on-demand services, such as the iPlayer, could have “a negative effect” on similar services from commercial operators, according to Ofcom.