The sponsorship strategy, which saw the company sign a deal with English cricket last year, aims to reinforce the “fans vs fans” positioning. The brand signed up former England cricketer Phil Tufnell and former Australian player Jason Gillespie during the Ashes test series. The cricketers were set head-to-head challenges, such as a lawnmower race. Crow says this helped the company demonstrate the “fan vs fan” element, while “dramatising the rivalry of England vs Australia”.

This PR-led campaign was supported with email marketing and CRM to further build up the rivalry.

Dedication to the supporters has also been demonstrated in a “get behind United” campaign, which gave fans the chance to have their face replace the Betfair logo when Manchester United football players were giving their post-match interviews.

Betfair is also planning to put social media to use. Since its foundations are online, unlike rivals such as Ladbrokes which began on the high street, it believes it has the advantage because its users are already comfortable with digital channels.

The potential for Betfair to build its user base is clearly there – gambling websites have increased the popularity of betting overall in the past three years, according to TGI. One-fifth (21%) of the population used a bookmaker or betting exchange in 2009, up from 14% in 2006. Betfair hopes that by telling its “fan vs fan” story through entertaining content, it can convince consumers to bet on its service rather than rivals. 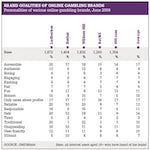