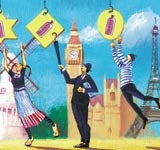 Italian men spend ages buying clothes, the Dutch like large shops and Southerners’ retail habits mirror Parisians’. With all this variety, designing a PoP campaign which works throughout Europe is a cultural minefield, according to Sarah Rayner

Do you decide what you want before you visit a store? Do you make a list and adhere to it religiously? Or do you head for the shops with some vague notion of what you’re looking for, deciding on your purchases as you wander up and down the aisles? Recent research by Point Of Purchase Advertising International (Popai) suggests that the way we shop is as much a reflection of where we live in Europe as it is of our organisational skills.

The findings revealed major differences between countries: whereas in Holland, 80 per cent of decisions are made this way, in Italy only 42 per cent are made in store. This suggests that Dutch shoppers are twice as likely to be influenced by PoP material as Italians. In the UK, France and Denmark, shoppers appear to be heavily influenced by PoP, making more than 75 per cent of brand purchasing decisions in store. In Germany, on the other hand, the figure is only 50 per cent. What lies behind this variation? Are the differences a reflection of distinct national characters, differing retail practices from country to country, or varying levels of brand awareness across Europe? And, given the findings, what are the implications for marketers planning European PoP campaigns? Is it possible to cater for the needs of individual countries without forfeiting core brand values?

Ziggurat director Adrian Day believes there are fundamental shopping differences between countries. He says: “It’s a generalisation, but it holds true: most men want to go into a store, buy something and leave; for women, on the other hand, shopping is more of a leisure activity. On top of these differences between the genders, there are significant differences between nationalities. Italian men, for instance, spend more on clothes than their Swedish or Dutch counterparts. Italian men are more prepared to browse and engage in the clothes-shopping experience. It follows that PoP material designed for Italians should take this into account, providing more of a range – perhaps an area to sit and talk or a coffee machine, so a shopper has time to think. In Holland, this would be inappropriate – a waste of space and resources. Instead, design and presentation which allow for quick, efficient purchasing might be more effective. The Dutch are more likely to respond to large, clear images showing how the clothes go together and can be worn – things that would seem patronising to an Italian.

Day adds: “It’s the same with campaigns for wines. In the wine-producing countries of Southern Europe, consumers are more educated, and PoP material heavy on explanation would hardly go down well. In the UK, although we are becoming better informed, people often opt for the safe choice, such as a familiar chardonnay. Here, PoP can help to educate and expand the market.”

All this seems to make sense, but there is a drawback to tailored campaigns: they’re expensive. “The more you customise, the more the price goes up,” continues Day. So how can a brand make its mark across Europe cost-effectively? “The starting point is always brand values. No matter which country you are working in, if these are at the forefront of your communication, campaigns will have a high degree of similarity. Only then is it appropriate to look at the individual needs of each country.”

DJPA Amsterdam managing director Hans Muysson elaborates: “On the one hand, marketing is about being close to individual consumer needs. So, for the majority of categories, we like to focus on injecting local perspective to the international brand. But economies of scale and globalisation are stimulating more brands to develop global or European identities. There are a few cases where whole product categories have already been established internationally, with little need for local influence. Cola is an example of such a category, Marlboro an example of such a brand. Both have such strong universal recognition that it is possible to produce uniform European PoP material.” Because such mass communication is cheaper, it allows the biggest brands to consolidate their hold on the collective unconscious still further.

Ian Millner, managing partner of youth marketing agency Iris, has worked on European campaigns for Puma and Sony Ericsson. He offers another perspective: “I believe the Popai findings reflect differences in retailing from country to country. In Italy there tend to be smaller, independent sole traders. The industry is more high street-oriented – there are fewer big, out-of-town multiples. These independent retailers are usually keen to fill what little space they have with products, rather than PoP material, so it’s physically harder to create a meaningful brand presence. In northern Europe – France, Holland and the UK – stores are much larger. In these huge, shed-like environments it is much easier to make a statement. Branding thus becomes more important, and consumers are inclined to make more purchasing decisions in store.

Nonetheless, says Millner, it is still difficult to create effective PoP. Consumers don’t always see what marketers want them to, and it takes hard work to “snap them out of autopilot”. He continues: “We might use unusual shapes, create movement with revolving designs or use lighting effects. It’s important to stimulate the senses and provoke interaction.”

FPP director Matthew Crummack agrees that the figures reflect differences in retail environments. He says: “Take groceries. A typical Italian grocer would be a ‘mama and papa’ shop – a world away from the out-of-town metal warehouses in Holland. The space available is so different that some designs simply won’t work. Distribution systems are dramatically different too – in the UK a campaign in 2,500 supermarkets would hit the vast majority of consumers. In Italy you might have to run it in 30,000 stores to reach the same number. Distribution would inevitably be far more expensive.

Crummack says that branding varies between countries too: “There are many global brands here in the UK, but in Italy and Greece brands are more local. The set of consumer choices is thus different. Choice is influenced by history too – in Italy, where family is especially important, a consumer is far more likely to choose a brand because their grandmother has been using it for years than they are in Holland.” It follows, then, that an Italian shopper is less likely to be swayed by PoP material.

So how would Crummack interpret the German statistics? Why do Germans seem less affected by PoP? “Some nationalities have preconceptions about buying certain goods at a low price. This means that regardless of how good the marketing is, they will always buy smart – it’s a totally different way of shopping to the way they shop in Holland.” Perhaps this explains why German consumers are less inclined to make purchasing decisions in store.

Kesslers International managing director Charles Kessler goes into further detail: “We undertook some research recently and concluded that, instead of seeing the EU as 15 countries, it can be seen as nine retail regions. A Milanese consumer has more in common with a consumer in Munich, for instance, than with one in Naples. Equally, shoppers in the South-east of England have more in common with Parisians than with their countrymen in the North-east.”

Kessler is positively exuberant about the role of merchandising and display in communicating consistent brand images across political and cultural boundaries. He says: “Three-dimensional marketing is a wonderful vehicle for speaking without language. People are becoming used to crossing borders to get the better prices, more choice and so forth. When they get to a foreign country, consumers recognise brands and pick up the messages targeted at them. Christian Dior, for instance, communicates a consistent message not just across Europe but all over the world. It uses merchandising to drive internationalism. PoP offers a double benefit – it communicates not just with consumers but directly with retailers. This is extremely important, given the growth of retailing power.”

But although a global approach might be relatively easy to implement, it is not necessarily simple. Crummack says: “If you’re designing shelf-cards for grocery multiples, it will have to be tailor-made for Sweden, because there you need to allow a space to slot in the price. In addition, you might want to create different PoP for small, medium and large stores, and for specialist outlets. However, you can still ensure a look and feel that remains constant, using key visual elements, uniform colours, and so forth. This enhances the brand, while retaining flexibility.”

So it seems that it is possible to produce an effective European PoP campaign. The solution is to be flexible – to acknowledge our similarities, while recognising and celebrating our differences.