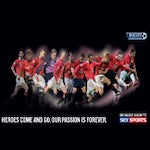 The deal will mean BT’s television customers will be able to view the channels in time for the start of the domestic football season.

BT’s move comes after Ofcom’s ruling that Sky would have to cut the price it charges rivals to show its premium sports channels http://www.marketingweek.co.uk/news/sky-and-ofcom-reach-interim-resolution-on-sports-channel-pay-dispute/3012920.article.

The regulator said that Sky would have to sell Sky Sports 1 and 2 for £10.63 a month each to rival broadcasters – 23.4% less than previously.

If the two channels were sold together, Ofcom set a price of £17.14 – a discount of 10.5% on previous wholesale charges.

BT has not yet revealed its pricing for the channels, but has suggested fees of around £15 a month in the past.

Sky is currently appealing against the Ofcom ruling, which follows a three-year inquiry after BT, Virgin, Top Up TV and the now defunct Setanta expressed concerns about Sky’s dominance of the pay-TV industry. Sky has an estimated 85% of the market.

Gavin Patterson, chief executive of BT Retail, says: “We are delighted to have reached this milestone, which means that we can be certain of offering Sky Sports 1 and Sky Sports 2 to our customers before the football season kicks off.  We know our customers will be keen to sign up for the two channels.”