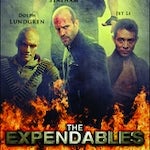 The campaign centres on a home-page takeover of Yahoo today and uses 3D images and trailers to promote the action film and drive ticket sales. It will also run across the Yahoo mobile site.

The ads expand when a user clicks on them to reveal video trailer footage and links to the wider digital activity including the Become an Expendable website and the film’s Facebook page.

Lionsgate is hoping to target 15-34-year-old males and is running trailers for the film across Facebook, YouTube, gaming sites and Sky Sports.

The campaign, created by MEC Interaction and developed by Waste Creative, also includes offline activity on TV, press and radio.