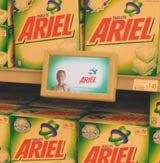 The Daily Mail, Stella Artois and petfood brand Iams are among those that have signed up to advertise on mini edge-of-shelf plasma screens being tested in Sainsbury’s stores.

Each brand has produced tailored content ranging from product information, promotional offers and competition details, to audio and video clips for the screens, which are positioned next to their products.

Sainsbury’s is conducting an eight-week trial of the screens at stores in Badgers Farm in Winchester, Beaconsfield in Buckinghamshire, Chiswick in London and Wigan, Greater Manchester. The trial is run in conjunction with a company called Screenplay.

The Sainsbury’s trial comes as Tesco is deciding whether or not to embark on a nationwide roll-out of plasma screens to broadcast what it labels Tesco TV, which is being tested at three stores in Cambridge and Surrey.

Tesco’s trial uses 42-inch screens hanging from the ceiling along the main horizontal aisle, mini screens on the top of fixtures and a screen at the entrance. Captive audience specialist Instrumental Media Group is managing the project and Kingston Inmedia manages infrastructure.

Clear Channel has reported a rise in profits from £146.8m to £155m for the three months to June. The group says revenues declined at its UK outdoor advertising business.

Anheuser-Busch (A-B) Europe is planning to launch Michelob Ultra, a low-calorie, low-carbohydrate American variant of the beer brand, in the UK next month. The move comes two years after the brewer scrapped Bud Lite, a similar low-calorie drink. The 1999 Bud Lite launch was supported by a 5m advertising and marketing push. It is not […]

Swordfish, the sales promotion and advertising agency, has won the account for Delia Smith’s new book range. A press and outdoor campaign will break this autumn.