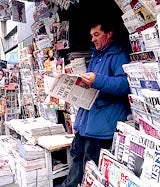 The looming downturn in the global economy, combined with panic in the stock market and a slump in advertising revenue, has media owners quaking in their boots.

The magazine and newspaper industries might well have celebrated the recent slump in TV ad spending, hoping to attract more advertisers for themselves. But as consumer confidence and corporate profits continue to dwindle, the press media is unsure whether the celebrations will last much longer.

Some press media owners are already preparing for the worst. News International has frozen recruitment in anticipation of a significant revenue downturn.

According to recent Media Monitoring Service (MMS) reports, the January to March 2001 ad volumes for press media (including magazines, national and regional newspapers) are lower than at the same time last year, with the total ad volume falling by 0.9 per cent. The figure includes both advertorial and display.

The figures for both January and February show that ad volume increased year on year by 2.7 and 1.6 per cent respectively. But in March, there was a slide of 5.9 per cent in press ad volumes.

One press buyer says: “Without a doubt there is a downturn in ad spend in newspapers and magazines, though the TV market will suffer a much heavier decline in ad revenues than the press media.

“There are indications that the press market will deflate. But it will be interesting to watch how the market behaves in the second quarter of the year. That will give a clear indication about whether or not advertising as a medium will continue to grow.”

Newspaper industry insiders say that the trend in April so far has been flat to downward – largely due to problems in the finance, computer and telecoms industries which has led to cuts in ad budgets.

Zenith Media predicts an annual growth of about 2.2 per cent in total ad spend for press this year, compared with 11 per cent last year.

Procter &amp; Gamble associate director of UK media at Bernard Balderston says advertisers are likely to shy away from a multimedia approach as they tighten their purse strings.

“When budgets come under pressure, the inevitable reaction is to focus on your strongest medium. And if there is a general recession then even the non-TV media will feel the pressure,” says Balderston.

He also cautions media owners against new launches in an “already crowded market”.

Advertisers, meanwhile, are taking advantage of the situation by buying newspaper space at the last minute, giving them up to 40 per cent more for the same spend.

MindShare managing partner Paul Thomas says: “Clients are tending to approve money quite late and are negotiating better deals. I also think we are going to see less full-page advertising.”

The bursting of the dot-com bubble, a sector which heavily accelerated ad revenue growth in the past two years, is seen as the main cause of the slash in ad spend.

He adds that, when the dot-com advertisers are removed from the equation, the fall in ad volume this year is less spectacular than it appears at first glance.

Other factors which have conspired to cause the downturn include the ongoing problem of foot and mouth disease, which is making the tourism industry reluctant to spend money on advertising, and led to the postponement of the general election.

The industry is sending out mixed messages about the seriousness of current market conditions.

The Guardian advertising director Stuart Taylor, says: “The advertising industry is still buoyant – we mustn’t start talking ourselves into recession.”

IPC Media ad marketing director Christina Hartley agrees: “The ad slump has mostly hit TV, and magazines are benefiting from it. Big advertisers such as P&G and BT are moving away from TV and into magazines.”

Reasons to be cheerful certainly do exist – the UK has low unemployment, stable property prices and low interest rates.

UBS Warburg media analyst Simon Mays-Smith says that advertising spend in consumer magazines is still growing at a rate of three to five per cent compared with last year.

He claims that classified, recruitment and property advertising spend in newspapers also seem to be robust and that recruitment advertising in the regional press increased by 15 to 20 per cent in the first quarter of 2001.

“The key question is what happens to recruitment advertising budgets after Easter. If budgets are cut, this would suggest that companies have frozen new hiring which in turn indicates they are anticipating tougher economic times ahead,” says Mays-Smith.

The prospect of a recession has certainly rattled media buyers and owners although in public most of them appear bullish about the possible knock-on effects on the country’s press industry.

The buoyant state of the UK economy might insulate us from a US recession, but whether or not the media industry as a whole hits the rocks still remains to be seen.

Outdoor advertising is innovative and visible, and looks set to ride out any recession. But contractors must not become complacent.

Last week Tesco announced pre-tax profits of just over £1bn. But why do we accuse it of profiteering, while looking back fondly to M&S’ happier days? asks George Pitcher