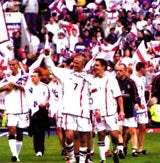 The moment England qualified for the 2002 World Cup, advertisers began planning how to make the most of next year’s footballing highlight.

With the event being held on the other side of the world in Japan and Korea, marketers will have to be more innovative than ever in order to capture consumers’ attention.

Not only that, but 71 per cent of the UK population is not aware of the early match times, according to a survey of 1,000 people conducted by Taylor Nelson Sofres for marketing agency Poulter Partners (MW last week).

The same research shows that 15 per cent of the population intend to watch all the games live, while 40 per cent of men and 18 per cent of women say they will watch at least some of the England matches live.

Poulter Partners managing director Gary McCall says: “TV companies will have to work harder than if the games were in peak hours to get advertising for the morning shows.”

He suggests that the early timing of the matches provides a great opportunity for cereal companies to advertise, but that it will work against alcohol advertisers.

The timing of live games may also mean that pubs miss out on an opportunity for increasing revenue. On the other hand, McCall suggests that motorway service stations, hotels and World Cup sponsor McDonald’s could create breakfast viewing sessions.

Peter Gandolfi, head of sports marketing at England team sponsor Nationwide, says: “The challenge will be for sponsors and brands associated with the World Cup, like Nationwide, to find and chase the audience.”

Evening highlight programmes and the draw for the World Cup group stages may provide alternatives to live matches for TV advertisers, as will radio coverage, newspaper sports pages and special World Cup supplements.

Industry experts agree on one thing – TV audiences for the live games will be substantially smaller than if they were shown in peak time.

ITV will no doubt factor this into negotiations for the UK broadcasting rights, yet to be sold by German TV company Kirch, which has paid &£748m to FIFA for global rights. Prisma, which is 85 per cent owned by Kirch, is reportedly asking &£170m for the UK rights. ITV and BBC are believed to have offered &£55m in total. Under the term of its contract with Fifa, Kirch has to offer the opening game, home nation games, semi-finals and final to a free-to-air terrestrial broadcaster. It is also bound by UK legislation which stipulates that live coverage of all matches must be shown on terrestrial TV, though Kirch is challenging this through the European Court.

A Prisma spokesman claims the cost of rights has significantly increased since those for France ’98 were negotiated in 1987, as part of a three-tournament package. He claims that the BBC and ITV paid &£3.35m for the 1998 World Cup, and that ITV recouped about &£50m through advertising and sponsorship.

CIA board director Andrew Greaves questions the commercial viability of next year’s event for ITV. He says: “I can’t see how ITV is going to recoup the cost of the rights. There will be demand, but not so significant that they can ask a premium.”

MindShare TV broadcast buying director Andy Zonfrillo says: “The World Cup is not going to create as much revenue because ratings will be lower than when matches are broadcast in peak time. But if a brand wants an association with the World Cup it will still advertise. Audience numbers will be lower, but brands pay for the profile – young ABC1 men.”

Greaves also warns against packaging the games and offering them at a premium, as ITV attempted to do in 1998.

“All the packaged-goods companies, such as Procter &amp; Gamble and Unilever, thought June would be overpriced, so they moved their money forward to April and March, which fuelled revenue inflation and meant June was a relatively cheap month.”

Granada Enterprises account director Alan Hodge admits there are lessons to be learned from 1998: “We thought advertisers had missed a great opportunity and perhaps it had been our fault for not explaining it properly. So for Euro 2000 and the Rugby World Cup we did audience projections and went to clients and agencies to explain the issues.”

If ITV gets the rights, then car, telecoms, sportswear, financial and digital TV advertisers – all traditionally associated with football – will undoubtedly be approached. Hodge says that, despite the timing of the matches, the event will still deliver a young ABC1 male audience.

The timing of matches may dampen brands’ plans to exploit the World Cup, but the European Sponsorship Consultants Association estimates that England’s qualification will mean a &£50m bonanza for sports sponsorship, advertising and related UK marketing activities.

Following on from last week’s world record theme, the Diary has learnt of a record attempt that defies logic and health and safety advice. Ian Ashpole is planning to tie helium balloons to himself and float to an altitude of 15,000ft. He will then cut the balloons and parachute to earth. Ian is obviously mad. […]

Royal & SunAlliance is rebranding its 360 estate agencies as Sequence next month in a major overhaul of its property service business.